The US Dollar/Chinese Yuan Connection = Trading opportunity.
In January 1994, China launched a powerful economic strategy that changed the industrialized world. They devalued the Yuan by 40% and then fixed that devalued Yuan to the US Dollar. It has remained fixed, at essentially the same rate, ever since.
That act dramatically altered global trading patterns.

By pegging the devalued Yuan to the US Dollar, the Chinese effectively cut the price of the products they export by 40%, a cut so deep that no other country could compete with them in labor-intensive industries.
Of course, some Chinese suffered when their products were offered to the world so cheap. Factory owners had to find ways to cut costs or go broke.
Some did go broke, but many others cut out the old communist inefficiencies, adopted new technologies, and used government loans to build huge factories that took advantage of economies of scale.
China’s devaluation acted as a powerful economic magnet that exerted its most immediate force on nearby countries and then on those further away.
The newly industrialized countries (NIC) of Asia were hit first. Factories closed in Korea, Taiwan, and Singapore. The equipment was shipped to China. Next, the factories in Indonesia, the Philippines, and Thailand were lost to China, precipitating the Asian financial crisis of 1998.
By the end of the 1990’s, factories in the US were closing and moving to China, too.
CHINA’S ECONOMY GREW NINE FOLD 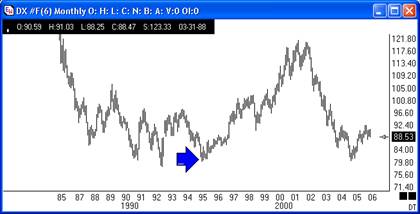 The cheap Chinese Yuan allowed China’s economy to grow nine fold in 10 years and its economy now eclipses all but three or four of the world’s largest economies. In the process, China accumulated 10% of the US’s entire foreign debt.
At first, the US Dollar enjoyed the benefits of being tied to China’s vastly undervalued currency and from the fiscal discipline of the Clinton years… From 1994 through 2001, the US Dollar gained.
It started falling in 2002 as the US debt increased but is finding support near the levels that existed when China first tied their currency to ours.
NOW THE US IS TRYING TO BREAK CHINA’S PEG TO THE US DOLLAR
The current administration is now trying to jawbone the Chinese into breaking the peg to the US Dollar and allowing their currency to strengthen. And it appears that the Chinese are ready to do so. But…as they say…be careful of what you ask for.
Up to now, the US Dollar and the Chinese economy have been joined at the hip. While the US runs a foreign trade deficit, the Chinese run a foreign trade surplus and this means that as a whole, the US Dollar economies are in good shape. The steady demand for US Dollars around the world continues, in part, because if the world wants to buy cheap Chinese goods, they need to use US Dollars to do so.
But, if the tie between the US Dollar and the Chinese Yuan is broken, the US Dollar will have to stand on its own fundamentals…and they “ain’t pretty”.
In fact, we think it is quite possible the US Dollar could collapse just as it did in the 1970’s when President Nixon broke with the Bretton Woods agreement, eliminated the last vestige of the gold standard, and allowed the US Dollar to float against other currencies.
THE GREAT INFLATION 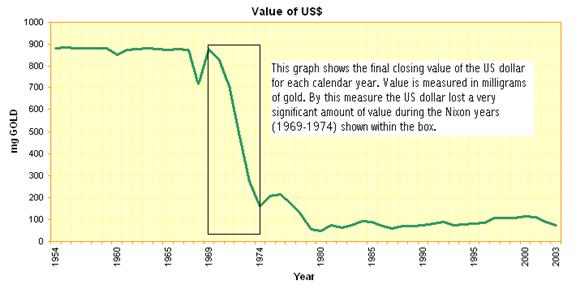 The 1970’s are known as the period of The Great Inflation. And for good reason. The inflation experienced in the late seventies was only matched by the inflation of the Revolutionary War!
The Great Inflation was the direct result of President Nixon’s currency policy. When President Johnson left office in 1969, inflation was running at 5.29%. When Nixon left office in 1974, US inflation had more than doubled to 11.1%.
The real culprit in the inflation was the devaluation of the US Dollar that Nixon brought on when he took the US Dollar off the last remnants of the gold standard and allowed the US Dollar to ‘float’ in value against other currencies..
But, it didn’t float….it sank.
And as the value of the US Dollar fell, commodities priced in US Dollars started to go up …some tripling, other rising even more. Many rocketed higher and then crashed, only to rocket higher again.
With a falling US Dollar, no one was certain just what price represented fair value for the commodities they needed. So every commodity rose until it found a price that rationed demand…and that price was usually at least 3 times higher.
Once the demand-rationing price was found, the commodity reversed to discover the price that rationed supply.
Here’s what happened to some prices back then:
Gold………… $100 ► $800.00► $300
Silver…….. $5 ► $ 38.00► $5
Cotton…….. $00.25 ► $ 00.90► $00.38
Corn…….. $1.20 ► $ 3.20► $1.80
Soybeans…. $3.00 ► $ 11.00► $5.25
Cattle…….. $00.35 ► $ 00.80► $00.56
Copper…… $00.55 ► $ 1.40► $00.55
Right now, with the Chinese currency pegged to the US Dollar, the US Dollar is acting as though it was on the gold standard. Chinese Yuan are not convertible to other currencies, yet. So, the US Dollar is the surrogate.
But, if China breaks the peg entirely, the US Dollar will probably sink….and those commodities traded in US Dollars will rise in price accordingly, and then crash…at least in US Dollar terms.
But…wait…there’s more, as they say.
Back in the seventies, the world economy was far smaller than today’s. Only 2 billion of the world’s 5 billion population enjoyed the economy’s benefits. The others lived subsistence lives.
Today, for the first time in world history, all major world economies are growing and the two most populous countries, China and India are growing the fastest. This has brought new demand to commodities and has driven prices for many commodities to unprecedented heights. Crude oil and the base metals are the best examples.
These newly growing economies are building factories at breakneck speed and without the industrial raw materials they need, those factories will be nothing more than machinery museums.
This new demand could mean that the price multiple that rations demand is now much higher than it was back in the seventies.
If there is a meaningful move by China to allow the Yuan to float, our favorites for sudden price appreciation are cotton, precious metals, sugar (still), and copper (still). Shorting the US Dollar wouldn’t hurt, either.
By John Flanagan
Flanagan Trading Corp
Futures and Options
Cottonjohn@aol.com
1 800 830 0539

One Response to Dollar Yuan Connection