When speculative excess grips a market, as I believe we have witnessed within global copper prices, they tend to gravitate back to the point where that excess buildup began. No matter how large or small it may be.
Enclosed are a few examples where you can easily see this in action. One thing to keep in mind, which is more really a matter of common market sense, the less liquid a market is the faster the move back down the mountainside. 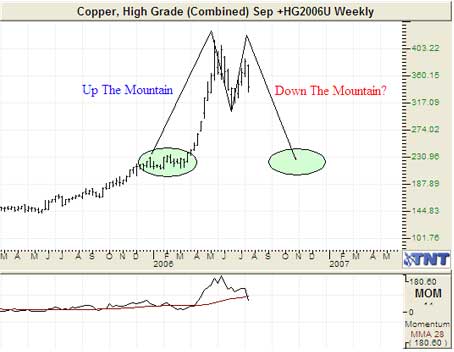 One other observation I have made through the years is after these large excess bull moves or blow-off tops the double top or M top seems to be the topping patter of choice. Many times these occur at a wave 5 count via Elliot Waves.
While there have been times in the past where V based tops occurred after these types of moves this seems to only take place in extremely thin markets.
This observation also makes sense from the point – what really is a chart? It’s simply a tool used to create a visual display of all human emotions interacting within a given financial market. At any given point in time that chart will represent all of the emotions/opinions of every single market participant. For the most part human beings by design don’t like change, hence an M based top as opposed to a V based one.
Case Study #1 – Natural gas 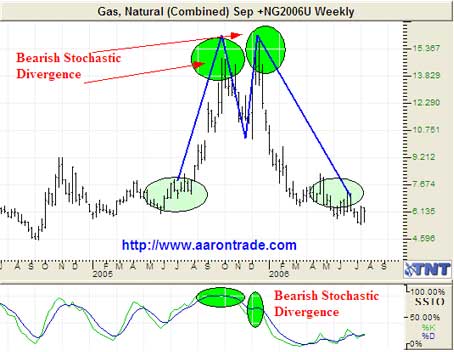 While not the largest example of speculative excess the concept remains the same. Here you can see that after a completed double-top natural gas prices continued to slide until moving all the way back to the area where the move began.
Case Study #2 – NASDAQ 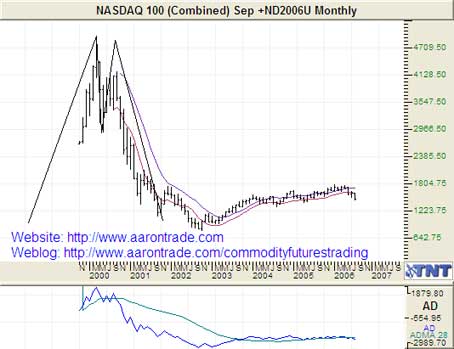 In late 2000 the NASDAQ completed a large double-top formation after a huge built up of speculative excess in the 90’s. Unless you have been living in a cave for the last decade it’s one of the largest asset bubbles in the history of financial markets. It wasn’t long thereafter the market moved back to the area where the real excess began around the 1200 – 1250 level.
Note: The chart above is the NASDAQ Futures. The chart below is data taken from cash index. 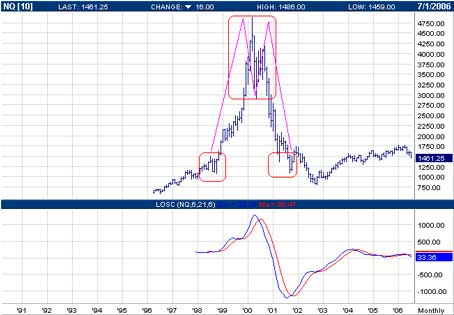 On the weekly copper futures chart we have receive our first momentum based bearish sign in quite sometime. Additionally, the market failed at SR Channel Resistance. Watch for the market to break SR Support. Which as of the close of this week the market held and rallied off of to the tee. 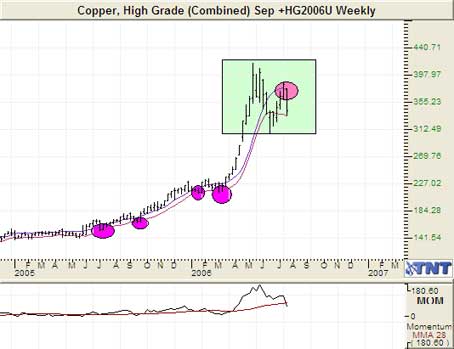 Although the market is fairly far away from completing this bump and run reversal formation you should at the very least be aware of it.
See other examples of the bump-and-run reversal chart formation:
http://stockcharts.com/education/ChartAnalysis/barr.html 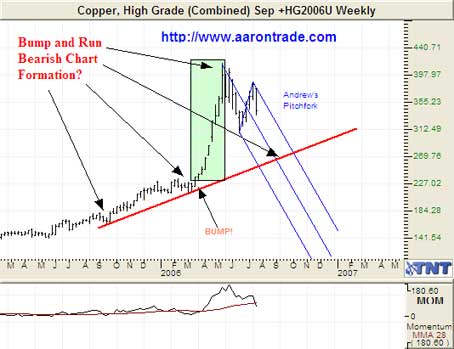 What to look for should this double top in copper futures be completed?
Obviously the first item we need to see is a violation of the neckline. Thereafter, be aware of the following few scenarios. 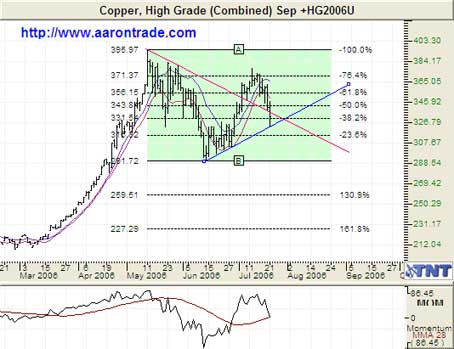 If utilizing options some ideas you may want to consider:

Note: To get an idea of possible idea trend propagation you can peg option strikes in the low/middle/high end of the Andrew’s Pitchfork.
Very Aggressive Idea:

The October options expire in 65 days.
The September options expire is 36 days.
You can pick this bear put spread up for about $300.00 or so. The potential profit on it is $6,250,00. However, you can also sell an additional call leg after the September options expire which at that point would turn the spread into a credit spread.
While this spread is relatively cheap in contrast to other spreads the drawback on it is if copper prices fall by 60 cents to the 270 area and you are at expiration you will not have witness any profit even though the market has made a $12,500 move! Once again it’s just some food for thought.
Paul Skarp
www.aarontrade.com
Commodity Futures Weblog – www.aarontrade.com/commodityfuturestrading