Investing abroad has been a fundamental part of institutional investor’s strategy for quite some time now, but now globalization of financial markets has given the traditional investor a chance to take advantage of the opportunities abroad. Over the last few years, especially since the U.S. recession in 2001-2002 when U.S. equities struggled, investors have looked for opportunities elsewhere. 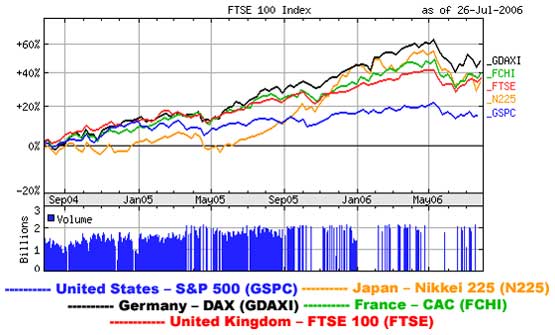 Over the last few years, international markets have been touted as a great diversification tool for portfolios, but have they provided the diversification they expect? Let’s take a look at figure 1.1 below. This chart consists of five of the world’s largest economies and their stock market’s performance over the past two years. As you can see from this chart, every market has outperformed the S&P 500. You probably only took one glance before you noticed that the trends and chart patterns look very similar between all of the markets.
The trends and patterns you see between these markets are because each market truly feeds off of one another. As these markets continue to evolve with new technologies, innovative financial products and international access to these products they may become even more intertwined. Remember, this chart only highlights the last two years of performance. These nations have been going through different economic conditions over that time period which effects their overall performance. For those looking to increase their exposure abroad and trade, these four international markets are the least risky and could be a great addition to any portfolio.
In conclusion, we can see that the world’s markets are truly intertwined. Not only has their performance been in tandem, but one country’s problems seem to be global; affecting several markets in its path. It will be interesting to see what happens over the next few years and whether the correlation remains or if one market will begin to differentiate itself from others. Another interesting analysis would be to analyze the rise of developing country’s financial markets. Developing countries are driving along at a rapid pace and we could see some great things out of countries like India, Mexico and Brazil.
by Charlie Santaularia
Managing Director
Parrot Trading Partners, LLC
cell 785.766.0773
office 785.749.0000
www.parrottradingpartners.com

One Response to Globalization of Financial Markets