The Japanese Yen has always been a tough market to trade. The Bank of Japan(BOJ) is infamous for the manipulation of its currency. That being said, we have just recently seen a dramatic change in the BOJ policy. Last Friday (07-14-06), the BOJ raised its key overnight call rate to 0.25 percent from near zero, ditching a policy of keeping interest rates at zero that it had followed since early 2001. This should open the door to continued rate hikes in the future and shows an overall improvement in the Japanese economy.

With the Japanese entering into a rate hiking cycle and the United states about to end or at least pause on its rate hiking cycle, we should see the Yen appreciate against the dollar. Fundamentally, rising interest rates is supposed to be supportive to the underlying currency. While we have seen short term Dollar strength we believe that that strength is temporary at best and this counter move has given us a great long entry on the Yen.
Click on the chart to enlarge 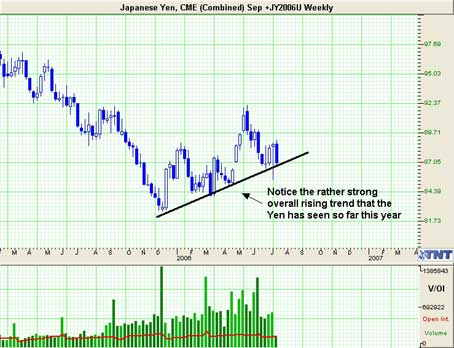