Silver has been range bound for the ladder half of this summer. We have seen a range between 11.75 – 12.75 traded for many weeks now. Today we had a dramatic move back to the lower end of that range and we are using this as an opportunity to buy long ahead of the bounce we are expecting. While metals have had a good run up in recent months this bull is far from dead. 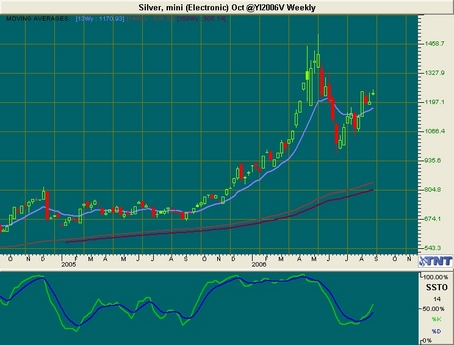 This idea is based both on Technicals and Fundamentals. Turning first to the fundamentals you can see that demand is not really falling off at all year over year. With our US government continuing to spend money like a drunken school girl on prom night, it is only a matter of time before traders wake up and realize that this country is broke (and broken in my opinion). The coming credit crunch is going to make Black October in 1987, seem like the good old days.
Technically we have seen a large run up in metals prices this past year and many might argue that this market needs to pause. We argue that bull markets when they happen often go much further than the “pros” expect. I have had some experience in this area. I wrongly predicted the top of the Dow in 1998, a bit early to say the least.
Profit Goal:
Max profit assuming a 10 cent fill is 40 cents ($2000) and occurs at expiration with the Silver trading between 12.75 and 13.00. This trade is also profitable at expiration with silver trading anywhere between the two break even points( 12.35-13.40) giving us a huge $1.10 range in silver that we can profit in.
Risk Analysis:
Max risk assuming a 10 cent fill is $500. This occurs at expiration with the Silver trading below 12.25 or above 13.50.
Derek Frey
Odom & Frey
www.odomandfrey.com
Call us at 1-866-636-6378