In setting up this trade we are looking to take advantage of a prominent support level near 575 which gives us an entry point very close to our sell stop, thus keeping our downside risk minimal. As the possibility of a short term pullback is quite plausible we recommend buying a short term at the money put instead of a stop to give us downside protection.

Purchasing the put also reduces the total risk of the trade to the premium paid for the option through its expiration. From a technical perspective, several momentum indicators are at the bottom of their ranges and these tend to produce the best signals in sideways oscillating markets such as we have seen in beans. In addition, the seasonal history of this contract has a pronounced pop between option expiration and last day of trading for the futures contract. Finally, looking at the COT report both small and large traders are currently net short, while the commercials have been adding to their long positions.
We are excited about the opportunity the soybean market is giving us right now. By beginning with the long term macro outlook using the monthly charts, we are clearly seeing a consolidation in the current sideways range. It appears that there is a significant level of resistance @ 615-620 that is evident on monthly, weekly and daily charts. Additionally, from a historical point of view, each time the price of beans moves up through this level the price tends to move quickly and with significant magnitude, consistently reaching the 680 level in a short period of time.
click on the chart to enlarge 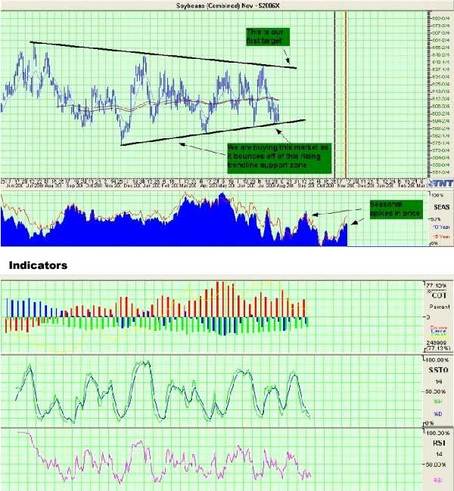 So we have a few things going on here that I would like to summarize: We are buying beans at a support level within the lower end of an established range. We can profit if the market simply moves up and test the upper end of the range near 620, if the market is able to break out above that resistance point, which we believe it can, then our target would be a move towards 675. We are using a protective put instead of a stop for a number or reasons. First reason is that doing the trade this way prevents us from getting stopped out. Second, because we are both long futures and a put we are somewhat in a strangle in that we can profit from a move in either direction with a little bit of creative trade management.
Exit Strategy
1. If the support level near 575 proves not to hold up then we will either exercise the put as a way to exit the trade, or we can sell the option and exit the futures. Market conditions at the time of exit dictate which exit strategy should be chosen
2. If support does hold and the market does in fact rally we could either exit the put and move a trailing stop in or simply put the stop in and keep the put on in case of a reversal. Again market conditions at the time of exit dictate which exit strategy should be chosen.
We prefer a trailing stops to targets as that will allow us to capture as much of the move as we can.
Profit and Risk Analysis
Max profit is unlimited but our targets are a move to 620 and then if we break out above that we are targeting 675. * Contact us for more details.
Max risk assuming a 24cent fill on the put is $1200 This occurs at expiration with soybeans trading below 600.
Derek Frey
Odom & Frey
www.odomandfrey.com
Call us at 1-866-636-6378