“It’s becoming clear that my suspicion that central bank selling is indeed a major factor behind the recent gold decline,” said Peter Grandich, editor of The Grandich Letter, in a note today.
The 15 EGA central banks have now reportedly sold roughly 380 tonnes, still substantially short of the maximum amount of 500 permitted by the agreement. But last week’s sale brought the number closer, with one week of sales still remaining prior to the September 26 deadline.
Matthew Turner, commodities analyst for Virtual Metals, told Resource Investor this update might include Portugal’s recently announced sale of 20 tonnes.
According to a press release by Banco de Portugal last week, 20 tonnes of its gold reserves were sold in the last few months in the context of the Central Bank Gold Agreement.
Turner said it’s not the largest weekly sale this year: there were about 57 tonnes of gold sold in the week ending on May 5, totalling at 62 million tonnes for the month. Perhaps important to note that the average gold price in May was $676/oz, hitting $730 on May 12. 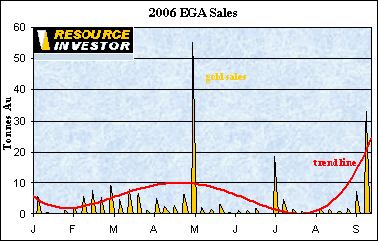 Excluding September, the average gold sales for 2006 are about 5 tonnes per week. Including September, the total weekly average for the year is now almost 6 tonnes. This month’s sales at 40 tonnes have already surpassed the monthly average of 33 tonnes.
Turner previously told RI that the Bundesbank is probably the favoured explanation for the shortfall as it did have an option to sell up to 120 tonnes this year but declined.
However, France is just short of its 120 tonnes and the Bank of Italy is another large holder whose intentions have never been revealed. And there are other declared sellers, including the Netherlands, Spain, Portugal, Sweden and Belgium.
“So given that, it’s hard to know to what degree it affected the market,” said Turner. “It can’t have helped, certainly, though I doubt on its own it could explain the weak price.”
Dale Doelling, chief market technician of Trends In Commodities, told RI that any time you have someone dumping product on the market it’s bound to have an affect.
“One of my clients asked me yesterday if there was any reason for the severe drop in gold and silver. My response: ‘More sellers than buyers,’” said Doelling.
Outlook
Grandich said he suspects the weakness could continue to month’s end until gold can get back above key resistance at $640. 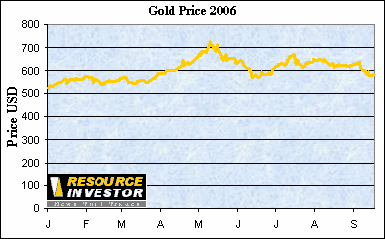 “While we can experience further weakness to as low as $540, a bottoming process is well underway,” he added.
Doelling said it looks like we’ll see a retest of the June lows.
“There is a bottom coming and we just need to look at those June lows to see if they provide the support that I think they will,” he added.
Doelling said that as long as the stock and bond markets continue to rally, there’s little chance of any bounce in the precious metals markets.
“But I believe very strongly that stocks are heading for a serious fall soon and this should provide the catalyst for a major rally in gold and silver,” he concluded.
Gold Price Activity
The average gold price for September so far has been $605/oz, after averaging in the $630s in both July and August. The price has lost $50 since hitting $636 on September 6.
Today, gold for December delivery ended the regular session with a gain of $3 to close at $586.20 an ounce on the New York Mercantile Exchange.
Source: Resource Investor