The markets have been on a steady rise since bottoming out in mid-July. Much of this relates to the markets belief that the economy and housing market is in for a soft landing. Basically, the market has been priced on the assumption that Federal Reserve Chairman, Ben Bernanke and the Federal Open Market Committee (FOMC) are finished raising interest rates, the housing market will soften, but not collapse, energy prices will not move higher and that inflation will abate as the economy moderates. Have the markets been priced for perfection? If so, we could be in for a wild ride over the next few months and the beginning of 2007.

Most likely, you may be asking why we have taken such a cautious view. Well, we are merely being rational and using logic in our analysis of the possible implications of what may happen over the next few months. Remember, at PTP we always attempt to protect the downside as the upside usually takes care of itself.
First, let’s talk about the FOMC. Are they truly finished raising rates? Although the August 8th meeting concluded with a pause in the real fed funds rate, the FOMC minutes, which were released August 29th, were much more hawkish than the dovish pause which proceeded. Although the market has priced in only a small chance of the Fed raising rates in September, the FOMC minutes left the door wide open saying that “many members thought that the decision to keep policy unchanged at this meeting was a close call and noted that additional firming could well be needed.” Therefore, if the Fed raises rates one more time before the end of the year, the equity markets will bleed the premium put into the market for an unchanged policy. Although some of the most recent inflation data has been kind to the market, it still is of concern and should not be discarded.
According to Moody’s Economy.com, 10% of jobs currently held in the U.S. are related to the housing sector. It is estimated that 35% of the recent job growth which brought current unemployment down to a five year low of 4.8%, came directly from the recent housing boom. The market has priced in a soft landing for the housing market, but what are the repercussions of a housing bubble that doesn’t land softly? If you are a pragmatic economist and a believer in the Philips Curve then the loss of job growth will drive the unemployment rate higher and decrease inflation. However, this may not be the case as high prices (due to inflation) continue to weigh on the consumer.
By looking at the Consumer Price Index (CPI) chart below, you will notice that the trend in inflation is increasing both in the CPI (blue) and the Core CPI (red) which excludes food and energy. Although the FOMC did mention that inflation could wane over the next few months (mostly due to 17 straight rate hikes) they did also state that “headline inflation continued to move up, on balance, in recent months, and consumer prices increased at a faster pace in the second quarter than over the previous twelve months.” Inflation has slowed somewhat and the markets are reacting to that. Plummeting gas prices and oil prices could also help tame an uncomfortably high inflation rate. 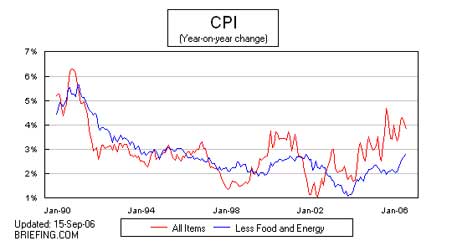 If the scenario pans out to be an aggressively slowing housing market leading to a loss in jobs and job creation in the housing sector. A slowing economy and inflation level that is above the Fed’s “comfort zone” of 2-3% (currently the year over year rate is 2.7%) then we have another possible situation on our hands: STAGFLATION. Yes, I know you don’t want to hear that ugly word, but I am bringing up worst case scenarios here. For those of you who don’t know about stagflation, just look back to the late 1980s when both unemployment and inflation were running at relatively high levels: that was considered stagflation. Those were times when a 14% interest rate on a mortgage was considered the norm and you could see mortgages as high as 20%…could you imagine a scenario similar to this today? Hopefully, the Fed has learned its lesson.
The housing market continues to show weakness as today’s housing starts came in down 6% (much larger decline than expected) and are down 20% from a year ago to the slowest pace in more than three years. Building permits, which typically qualify as a leading indicator in my book, showed a seventh consecutive decline and there are no indications of an immediate bounce from these levels. Now that I stated these numbers, I have to say that the mortgage-led lending industry may provide some support for the market as the economy has continued to prove its resilience and mortgage rates have held below 7%.
Currently the economy (and the market for that matter) is relying on several factors, each of which could have a significant impact on the economy in one way or the other. Obviously, we would love for the economy to continue on a steady pace of growth while the market continues to rise, but as consumers, we have to be realistic and note the changes that are happening. We care about what we will be paying the next time we drive to the mountains or check out of the grocery store. Remember, consumers account for 2/3 of the Gross Domestic Product (GDP) and they have a huge impact on the economy’s progression.
The market has currently been priced for perfection (despite today’s slight decline in equity markets) and the wall of worry that was so prevalent over the past few months seems to have dissipated. But it could certainly leak back into the minds of traders with one piece of disappointing data. Could the housing data today be that piece of data the bears were looking for to begin another decline? We don’t know and we don’t predict to know, but we will continue to take note of these developments. Remember, we are merely pointing out facts about the economy’s situation and the directions it may take.
Data Source: Briefing.com, Federal Reserve, National Association of Realtors
By Charlie Santaularia
Managing Director
Parrot Trading Partners, LLC
cell 785.766.0773
office 303.284.9232
www.parrottradingpartners.com
charlie@parrottrading.com