The Japanese Yen has suffered due to Dollar strength in recent months. We are seeing signs that the tide is turning in this market and are positioning long for the balance of this year. The Bank of Japan (BOJ) has recently entered into its own rate hiking cycle and have just recently hinted at another rate hike coming this year.

To quote a story in Bloomberg yesterday:
“Government bonds have lost 0.72 percent this month as the Bank of Japan governor, Toshihiko Fukui, suggested the central bank may raise interest rates this year, after increasing them for the first time in six years in July. The declines pushed yields on the government’s 1.7 percent notes due in September 2016, as high as 1.81 percent, close to the 1.9 percent level some insurers have set as their target to begin buying.
“Government bond yields are at a very attractive level,” said Akito Fukunaga, a fixed-income strategist in Tokyo at Credit Suisse Group. Demand for longer maturity debt like 20-year bonds is rising because “the bank is keeping its hawkish view on the economy and prices.”
So if the BOJ makes good on its rate hike and if, as I suspect, the FOMC’s hands are tied for the rest of the year then the Yen is almost sure to appreciate against the Dollar. This trade is a way to minimize risk while maximizing the realistic target between now and expiration. We have a huge range that the Yen can end up in where we can profit. Any close at expiration between 85.45 and 89.55 will result in a profit.
click on the chart to enlarge 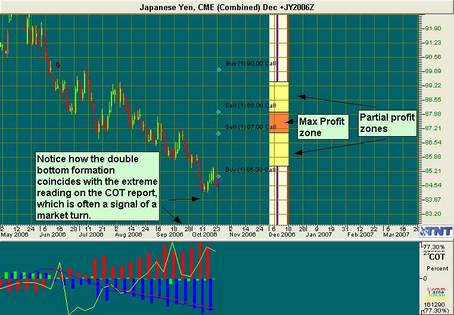