Crude oil has drifted in a narrow sideways channel for over two months now. OPEC has recently hinted at another production cut to further stabilize price. Today we saw inventory numbers for crude and distillates lower than expected. At the same time we have colder weather bearing down on us. The following is an excerpt from today’s issue of Gulf Times from Doha, Qatar:

“Price support is coming from a range of different factors at present, including forecasts of a change to below normal temperatures in the US northeast for later this week and early next,”

Barclays Capital analyst Kevin Norrish also said that crude futures were being boosted by expectation that dollar weakness could boost re-stocking activity of products such as heating oil in some major consuming markets such as Germany.

So you can see that the weakening dollar is the the rising tide that lifts all ships. Crude is poised to move back into the mid sixties in the near term and this trade is designed to profit from exactly that.
click the chart to enlarge 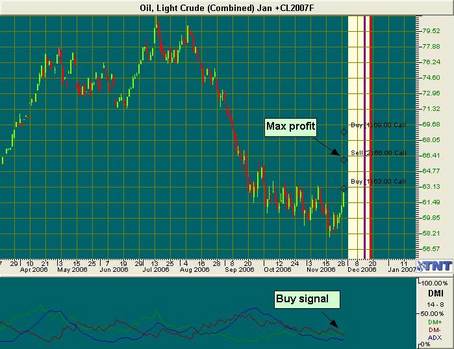