Gold has been one of the leaders of the bull market we are seeing in commodities. After a strong run to $750 earlier this spring we have seen gold sag and sink back below $575. On the daily chart Gold has in the past two weeks completed and broke out of a very large coil pattern that should give this market the energy it needs to be able to retest the highs.

We already had a great trade here last month when we went long the 600-625 call spread which we exited this week for about a 400% return, so we are recommending rolling at least some of those profits back into this trade.
We saw a soft PPI number come out this week and that has caused a pause or stall in this market, giving us an opportunity to enter rather than chase this market. Look for continued trouble around the world to be one of the catalysts that move gold back above 650 and beyond but even more important than that is the announcement from China this week. On monday China announced that they are diversifying there currency away from dollar assets in favor of Gold. This is a major story that most institutions have yet to recognize. This simple bull call spread gives us a very attractive 5 to 1 risk reward ratio while keeping costs and risk low and defined.
click on the chart to enlarge 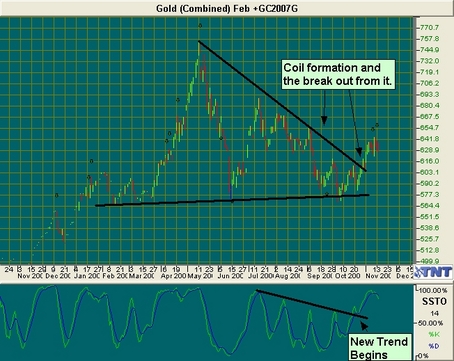 One Response to Gold Trade