Silver has seen a very solid bull trend over the past few months and more recently, has been consolidating around the $14.00 level. This consolidation has formed a bull flag and this trade is simply a low cost way to be long an at the money call. To buy the 14.00 call by itself, rather than doing the spread we are suggesting, would cost you in excess of $2500. I mention this so you begin to understand why we do these trades as spreads. Frankly the cost of these options without the spread is too high for the average trader’s risk tolerance. That is one of the primary reasons we prefer these types of spreads.

Keeping risks low while having a realistic chance to profit. This trade is very attractive because we have a 84 cent range between 14.08 and 14.92 that will result in a profit at expiration. At the same time we keep risk defined and very low for this volatile market.
click on the chart to enlarge 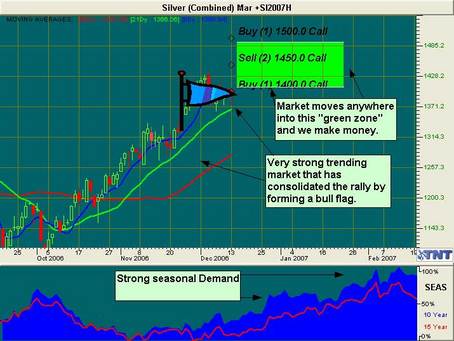