Coffee has been pushing towards new highs for many weeks now. Technically coffee has recently broken out of a multi year consolidation which should open the door to a significant rally as we go forward. Brazil is reporting a sharp fall in production for the 2007-2008 crop and commodity funds continue to increase their long position, much like they did in December of 2004 just as the last major coffee rally was getting under way. You can clearly see these funds building a position by looking at the Commitment of Traders (COT) data on the chart below.

The commodity funds are represented by the blue bars below the chart. If coffee can break out above 130 then we should see a fast move to 137 and then 145 as those a prior points of resistance. This trade give us the a ability to purchase an at the money call at a reduced cost and risk because of the spreads design. It also has a very attractive profit range of 31 point between 132 and 153.
click on the chart to enlarge 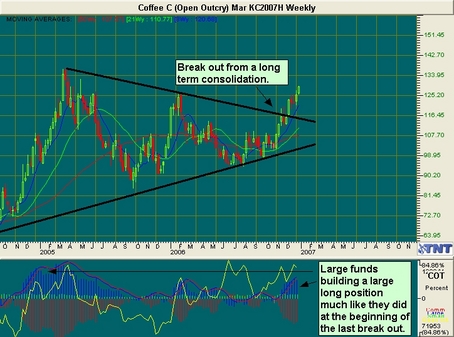