Corn has been one of the best performing grain markets in 2006 and now 2007 has started with a bang. After last weeks bullish crop report we are seeing corn trade above $4.00 per bushel for the first time since 1996. Much of the new demand is coming from ethanol, but harsh weather conditions are also a factor. Back in 1995-1996 when corn last traded above $4.00 it quickly rallied to just above $5.00 before turning back down. That is what we are expecting again with this trade. A move back to resistance at $5.00.

The trend remains up as we continue to hit new highs almost daily. This trade was actually brought to my attention by a client, thank you Jude! This trade fits the parameters we look for with a near the money call being bought with plenty of time for the expected move to materialize and and giving us 4 to 1 on our money. 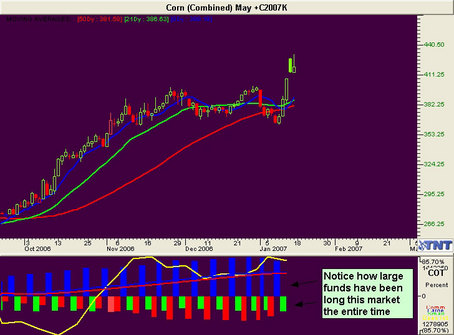