US 30 Year T- Bonds have been slowly drifting lower as the idea that the FOMC is going to lower rates continues to lose steam. Continued economic data shows that inflation fears continue to loom large and that has the Feds’ hands somewhat tied with regard to any rate cuts in the near future. Couple the data with the fact that most other countries around the world continue to raise their interest rates, and you have the makings of a falling bond market.

Recently bonds have taken out a critical support level at 112 and that has now opened the door to a retracement back to the lows from October 2006 at 110. Using a butterfly for this trade gives us the ability to position ourselves short an in the money put while limiting risk to the premium paid for the spread. It also gives us a very large profit range of 3 full basis points in T-Bonds.
click on the chart to enlarge 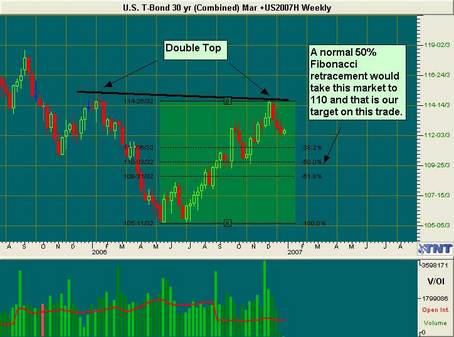