Has the market really made a double top or is corrective action taking place in typical summer doldrums fashion? It could be a little of both. First off, the summer months can be volatile. June has been one of those volatile months. Daily trading ranges have been above the last 15 year’s average (see chart below). However, a typical summer can be summed up by the summer doldrums. That means weak or sideways markets. We have had a little of both this month as the markets have been volatile defined by the larger than average daily trading ranges, but we have been stuck in a trading range between 1490 and 1540 in the S&P cash market. 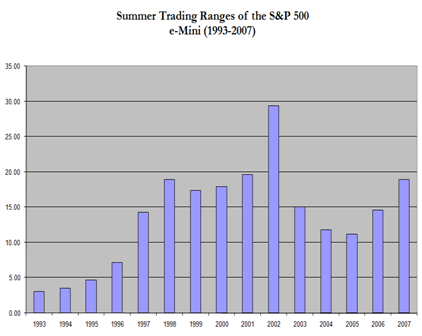 Did the market just make a double top? It looks possible and it is more likely than not. Let’s take a look at a few charts. The chart below is the S&P 500 cash index. Notice the market has made two attempts at the 1540 area, only to be turned around and head lower to the 1492 area where we have found some support each of the last three months. Also, note the 10 day moving average (blue) has turned negative and has been negative since early June. That is not good for the bulls, but they still have case to rally this market off the support area at 1492 simply because the support looks very solid.
Take a look at the MACD line that has now been looking bearish for some time and is about to turn negative. Another strike for the bulls. If the bulls can find some support and CLOSE the day higher, they may have a case to make a third attempt at record highs. The bears have been in control of the afternoons, which means the sentiment has changed in their favor. If the bulls cannot hang on to the gains this afternoon, I would not be surprised to see the market pass through the 100 day MA line (light green) and head toward the old highs near 1450 or so. That would make many analysts and researchers a little more comfortable as it would mean a 5.8% drop from the highs. 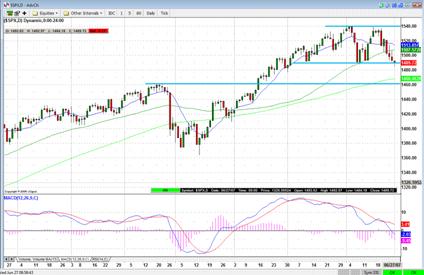 The same analysis can be made for the Dow Jones Industrial Average. The market has made a double top near 13,680 and has dropped down to the same area we have found support in the past two attempts at a sell off near 13,300. The MACD line is still positive, but headed in the wrong direction for the bulls. If the index can recover off of support, we can identify this as our first real trading range in some time. The DJIA has moved in tandem with the other indices, but has been making record highs at a feverish pace. Well that has now stopped and with a combination of slower trading activity and global concerns, this market has a different feel than just a few weeks ago. The trend has been higher and these dips have been buying opportunities, so I don’t want to make any calls just yet. 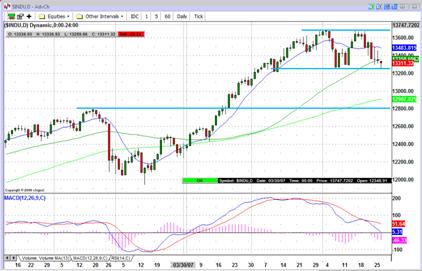 However, don’t think for a moment that the market is in great condition. There are interest rate worries, persistently high gas prices, geopolitical concerns and maybe the largest issue of them all concerns; the housing market. Not only are inventories at their highest levels since the last housing market recession in the early 1990s, but mortgage rates have been rising and there is no sign of a housing bottom in sight. This may lend support for more sellers to come in here and push the S&P to its next major support level at 1450.
The FOMC releases their monetary policy statement tomorrow. It is expected they will keep rates at the current 5.25% level (it’s been almost a year at this level now) and that the statement may not change too much. They may begin to address the bond market and the increased economic growth. Whether they mention more concerns on the housing market is yet to be determined, but I would not be surprised. Next week is a holiday week with Independence Day falling in the middle of the week. That could mean another slow trading week as many traders will begin to wind down their trading so they can enjoy the break.
by Charlie Santaularia
Managing Director
Parrot Trading Partners, LLC
cell 785.766.0773
office 303.284.9232
www.parrottrading.com
charlie@parrottrading.com