It has been quite a while since I last wrote a post, but the break was needed. With the recent market volatility, I was focused on our company and making sure all things were in place during what some have dubbed the “Liquidity Crisis of 2007” (even Wikipedia has an entry under this name). Towards the Labor Day weekend I took some time off and retreated to our office in Florida, but when I thought I was getting away from the market, I was more intrigued than ever. Maybe it was because some of our predictions from earlier in the year were finally coming to fruition. Maybe it was my time away from writing when the markets beat drummed in my head louder than before. When I hear the beats in my head, I typically take to the computer and begin ranting about the economy, markets or general interests of mine. This time, I forced myself to patiently wait until after the Federal Reserve policy statement to begin posting on a regular basis. That time has come and here we go. Let’s first talk about the policy statement and then jump to a Bull/Bear debate.

As I mentioned earlier, I felt rejuvenated after my little break. However, the Fed quickly interrupted that feeling with a 50 basis point (bps) rate cut at the discount window and a 50 bps cut in the federal funds rate. The bears had it going for a while, but bears were quickly cut short by the Fed for the second straight time by their monetary policy actions. It wasn’t a complete surprise to see the Fed’s actions as there was about a 50-50 chance of a 25bps vs 50bps cut in the fed funds rate. Instead, the market’s reaction to the cuts was astonishing as the markets rallied to their largest one day gain in more than five years (all major equity indices were up more than 2.5%, with the Russell 2000 closer to a 4% gain). But wait, we can’t contribute the entire rally to the bulls because the bears were covering their behinds the entire day which in turn accelerated the rally. I give in, the bulls are currently in charge and the rate cuts were obviously needed and greeted with flying colors by everyone from analysts, CEOs, and of course the equity markets. Where we go from here is anyone’s guess, but let’s get to the Bull/Bear debate. Equity markets are approaching their highs from July, but the debate is still out there about the market’s future.
1. Housing Market – The housing market bubble has burst and is currently under pressure as the recession is in full swing in this sector of the economy. Although there will be many optimistic calls for it to bottom out over the next few quarters, don’t expect it to occur in 2007. Housing starts have hit a 12 year low in August, building permits continue to plummet to levels not seen in 10 years, and inventories are increasing each week. That leaves us with a huge supply of real estate, yet relatively mitigated demand as median prices have not taken the 10-15% declines that a majority of analysts have noted would help spur demand.
Edge: Bears

2. Corporate Profits – Corporate profits continue to slow. Companies with a global presence like Microsoft and Coca-Cola will continue to do well with global economic growth; however, domestic companies with no global presence are being hit with consumer spending on the slide and a weak housing market, which had acted as a buffer for consumers to spend at previously sustainable levels. The financials have been hit harder than most corporate stocks, but this can be attributed to their hedge fund and subprime exposure in the July/August meltdown as well as the unknowns currently existing in the credit markets.
Edge: Tie. Bears gain the edge if earnings do not pick up by the first quarter. Bulls gain the edge if earnings surprise.
3. Global Growth – The strength in foreign economies continues at a rapid pace, with the U.S. lagging behind (see table below). The Chinese and Indian economic growth has been so strong that rate increases (the opposite of the Fed’s latest missives) have been implemented to slow down these unsustainable rates; 10%+ in China and 8%+ in India. As mentioned above, global corporations based in the U.S. will profit from this growth and give a support to the U.S. economy in the short term. As foreign economies grow, their demand for traditionally safe investments in the U.S. will increase and help support our tortoise like growth.
Edge: Bulls 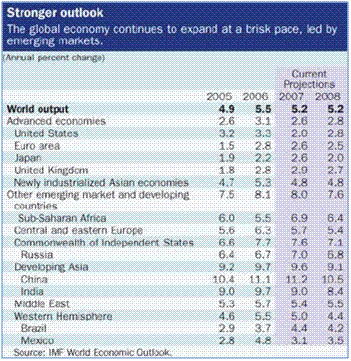 4. Energy and Commodity Prices – Crude oil prices have increased more than 30% in 2007 and have recently hit a record nominal high above $82. Without a disruption during the hurricane season (so far), the price is fundamentally being driven higher with more demand than the supply can currently meet. Increases in commodity prices such as gold which hit a 25 year closing high this month will put pressure on inflation measures that we won’t see for another month. Wheat, corn, and copper prices have all maintained their high prices, which can and will eventually affect the bottom line of companies (see Corporate Profits above) or the prices will have to be passed down to the consumer (see Consumer Spending below).
Edge: Bears
5. Inflation – Contradicting my statement earlier about high energy and commodity prices, we have a double edged sword. Although I believe the CPI data is an unimpressive way to measure inflation, it is what it is and the Fed depends on it for gauging inflation. The CPI has been benign (see chart below) yet still runs the risks of moving higher, especially with the recent rate cuts. But for now, inflation measures have bullish implications if it’s a non-issue.
Edge: Bulls

6. Consumer Spending – Accounting for more than 2/3rds of the United States economic growth, consumer spending is one of the most indicative measures of growth in the U.S. Therefore, it is not surprising that some analysts are calling for a recession while consumer spending has continued to weaken. Not only are we seeing signs of deterioration, but it is hard to logically believe that consumers will spend as generously as before (even though they most likely will during the holiday season) because of the following factors; weak housing economy affecting psychology to spend from their home equity “piggy bank”, higher energy and food prices eating into their budgets, and a belief that the “credit crisis” will impact their overall wealth in the near term.
Edge: Bears
7. U.S. Dollar – Once the strongest currency in the world now looks like a pitiful apprentice in the currency hierarchy. We are sitting near record lows against the Euro, British Pound, Swiss Franc and Canadian Dollar. This is pathetically being manufactured by low interest rates (by historical standards) and global growth outpacing the U.S. economy.
Edge: Tie. Bulls and Bears will pay more attention to factors that are tied to the Dollar than the currency itself. Until we see some more concern this one results in a tie.
8. Employment Data – The unemployment rate is low (4.6%), yet non-farm payrolls are on the decline. In fact, the August employment report showed the first net decline (-4,000 jobs) for the first time since coming out of the recession in 2003. This could be one major sign of a recession looming, that is if we aren’t already residing in one. Another interesting look at the underlying data comes from Barry Ritholtz of Ritholtz Research and Analytics (http://bigpicture.typepad.com/comments/2007/09/a-closer-look-a.html).
Edge: Bears

9. Interest Rates – Rates have been cut 50 bps to 4.75% and the discount window has also been cut 50bps to 5.25%. This should help banks and other lenders obtain credit lines that have been hard to come by during the “Liquidity Crisis of 2007”. The help might not reach those who truly need it in the short run; mortgage borrowers with teaser rates resetting, borrowers in foreclosure, and investors in ignorantly rated AAA paper (CDOs, CIOs, etc) which are tied to subprime mortgages. The rates will help sustain economic growth as companies may now begin to finance deals and become more productive, eventually sparking U.S. growth. The reality of the rate cuts not being fully played out for another 9-12 months down the line.
Edge: Bulls
The tally is in and the bears have a 4:3 edge over the bulls in the analysis above(there were two ties). Overall, this is a healthy debate yet a few issues have the ability to switch sides easily; inflation, consumer spending and energy/commodity prices. For now, the bears have the case for equities to move lower, but because of the recent rate cuts bulls have the momentum on their side. As we approach the record highs in the Dow and the S&P (again) it will be extremely interesting to see how technical analysts and fundamental analysts begin to debate the core of their arguments. The bears have been slighted by the Federal Reserves adding liquidity to the system with direct injections and discount/fed funds rate cuts. These were expected and were at best, the right thing to do in the current environment. My guess is that by the end of the year a few of the debates will be closed as we determine if we are in a recession, if inflation really matters, and if the rate cuts were enough to spark economic growth. I think you know my opinion, so we’ll leave it at that.
Lastly, I will begin posting on a more regular basis now that I am in the swing of things. Thanks for the hiatus and enjoy the upcoming posts.