This is a trade on tomorrow’s FOMC meeting. The overall market expects the Fed. to cut rates by .25 basis points tomorrow at 2:15 EST. Stocks and bonds have already priced this in. The key will be the guidance they give on future rate decisions. Frankly we expect that they will be forced to make some mention of a concern about inflation and if they do we should see Bonds pullback.

Technically we have a potential double top on the daily chart noted below. The vertical lines are Fibonacci time extension sequence and the horizontal lines are Fibonacci retracement levels. Using both of these together we can predict both where and when a market could move towards. Notice that the 50% Fib. retracement level is just below 110 which is the point the market pulled back to in mid September. Now notice how accurate the vertical lines have been in identifying turning points in this market since we reached the high, curiously on September 11th of this year. Today is the 34 point on the horizontal sequence which indicates that we are at another potential turning point that should then trend until at least the 55 point is hit which is November 28th of this year. So put all this together and we are expecting tomorrow FOMC decision to be a catalyst for a turn lower in this market that should then trend lower until at least Thanksgiving. Or target is to make 200% on our risk but we do stand to make even more if bonds fall beyond the 50% level. 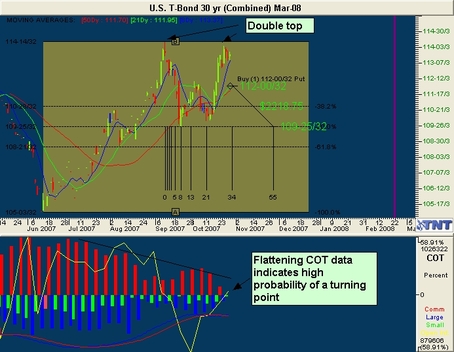 Max risk, before commissions and fees, and assuming the above mentioned fill would be $781.25. The full premium paid for the option is lost at expiration if the market expires above 112.

All eyes on the Fed. this week…
Lean Hog Trade Recommendation