This is a trade on tomorrow’s G7 meeting. The European Union has publicly stated that the appreciation of the Euro against the Dollar is becoming an ever increasing problem for its exports. Part of the discussion at the G7 meeting will be how to deal with this issue and our sources tell us to expect the Europeans to push hard for stabilization of the Dollar. Today we saw the Dollar index hit new 40 year lows, so with this trade we are obviously bottom fishing but by keeping risks below $300 we feel the potential reward far out weighs the risk. If the Dollar does in fact stage a bounce we are targeting a move back up to at least 80. 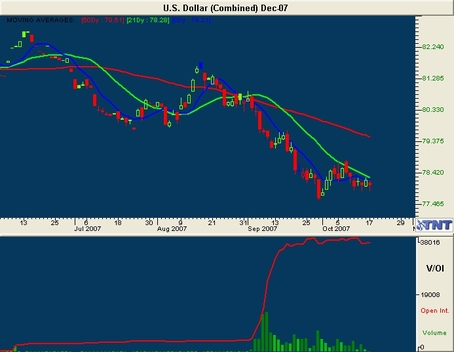 Max risk, before commissions and fees, and assuming the above mentioned fill would be $300. The full premium paid for the option is lost at expiration if the market expires below 79.