Record Treasury refunding and a less than stellar 7-year note auction were bearish for the long bond and notes. However, the market was unwilling to react to the news until it heard what the Fed had to say. Immediately following the Fed announcement, which was relatively neutral for Treasuries, rates across the curve began to spike as prices plummeted. What looks to be the result of sell stop running, the 30-year bond briefly traded as low as 121’25 and the 10-year note saw 120’16. Perhaps the most dramatic of the complex was a move that brought the 5-year note to the mid-116’s.
Currencies continue to be choppy and have become nearly useless as a gauge to Treasuries. Nonetheless, today’s dramatic Euro rally and Dollar plunge were notable. Our best guess (in a nearly impossible market) is that the Dollar will trade slightly weaker in the near-term but may be finding a low. If that is the case, Treasuries may eventually be propped up by the currency strength.

The first quarter GDP was reported at a negative 6.1%, well below analyst estimates of 4.7%. However, inventory contraction was noted as a large contributor leaving traders feeling relatively optimistic. The icing on the cake came in the form of a stronger than expected personal consumption. Many believe that the consumer is typically the first sector to open their wallets coming out of a recession.
We are hearing that a large bank was very active in buying out-of-the-money call options in the 10-year notes. Strike prices noted were 127’s and 126’s. Do they know something that we don’t?
Today’s action leaves the Treasury complex slightly oversold and susceptible to a short-term bounce. However, it appears as though the spike below support in the 30-year may have paved the way for lower prices. We think that, depending on the size of the potential bounce, 118’25 is possible within the next few weeks.
Our instincts in regards to the short June bond 118 put were proven valid today. We had recommended that our clients exit the position yesterday and while the trade may still end up working out, the risk and reward profile wasn’t favorable. Hopefully a better opportunity will present itself shortly. Stay tuned. 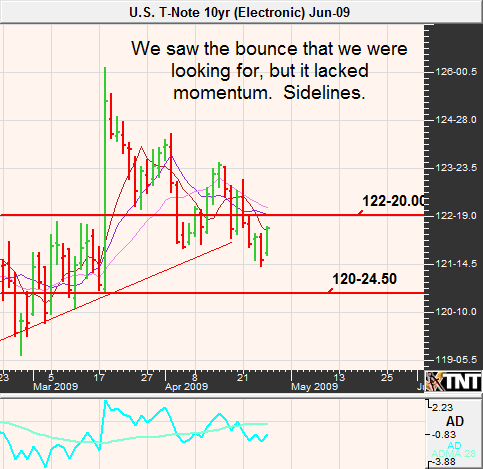 Treasury Bond and Note Option Trading Recommendations
**There is unlimited risk in naked option selling.
April 17 – We recommended to sell the June Bond 118 puts near 20.
April 22 – Those of our clients that didn’t get in on the original recommendation were able to get in today at better prices. Fills were coming in anywhere between 24 and 21.
· April 28 – Clients were advised to liquidate this position at a small loss prior to the FOMC announcement due to excessive event risk.
Treasury Bond and Note Futures Trading Recommendations
**There is unlimited risk in trading futures.
Flat
Eurodollar Futures Trading Recommendations
**There is unlimited risk in trading futures.
Flat
Carley Garner
Senior Analyst / Commodity Broker
DeCarley Trading
cgarner@DeCarleyTrading.com
1-866-790-TRADE
Local : 702-947-0701
www.CarleyGarnerTrading.com
www.DeCarleyTrading.com
*Due to the volatile nature of the futures markets some information and charts in this report may not be timely.
There is substantial risk of loss in trading futures and options.
Past performance is not indicative of future results. The information and data in this report were obtained from sources considered reliable. Their accuracy or completeness is not guaranteed and the giving of the same is not to be deemed as an offer or solicitation on our part with respect to the sale or purchase of any securities or commodities. Any decision to purchase or sell as a result of the opinions expressed in this report will be the full responsibility of the person authorizing such transaction.