Mixed economic data lead to a relatively mixed session, but selling across Treasuries did show up in afternoon trade. The government’s third stab at fourth quarter GDP came in at a respectable growth rate of 3.1%. On the other hand, Michigan Sentiment was reported at a slightly lower than expected 67.5. However, as we all know…it is what consumers do that matters, not necessarily what they say.
For the second time this week, selling in Treasuries was triggered by comments made by a regional Fed President. Today, it was Philly’s Plosser who proposed “..raising rates and shrinking the balance sheet…”.
It is getting harder and harder to argue the benefits of low yielding, fixed income securities. Higher equities, lower gold and “stable” commodities (“stable” inflation) all seem to be reasons to look for lower Treasury prices. None-the-less, the market has fallen a long way since last week’s panicked rally and could be nearing support.
Earlier this week, we were looking for a 1,2,3 top to occur, which would have meant one more run at the highs before turning over and the market did just that. Unfortunately, it wasn’t easy to identify until after the fact. Our charts were showing such a rally would have reached the mid 122’s but we now know the quick run to 122’08 was all the market had in it. This leaves us feeling uncertain about the near term direction and looking for a clearer signal.
That said, seasonal tendencies suggest overall weakness in the coming weeks but buyers tend to show up in late April. With this in mind, we feel like the best trade will be from the short side..ideally from better levels, if possible. We see support in the 30-year bond just over 120 and 119ish in the note. If these levels hold, the bounce could finally see the mid 122’s in the long bond (121’08 in the note). If so, we’d have to lean lower. On the flip side, if there is no bounce…the June 30-year could trade back to 118, at which time we might not mind being temporarily bullish.
* Due to time constraints and our fiduciary duty to put clients first, the charts provided in this newsletter may not reflect the current session data. However, market analysis and commentary does. Charts provided by Track ‘n Trade, Gecko software.
**Seasonality is already factored into current prices, any references to such does not indicate future market action. 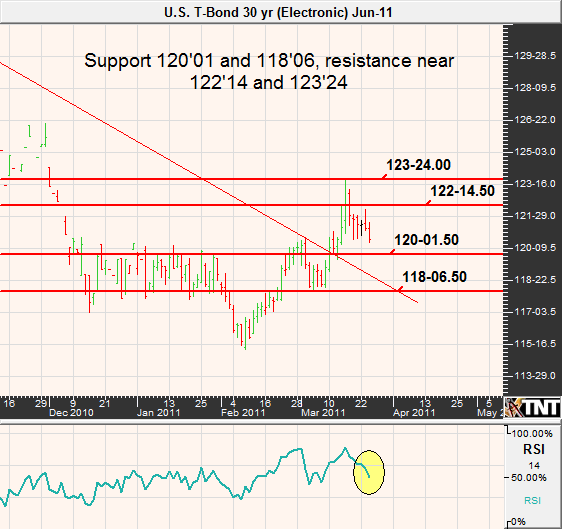 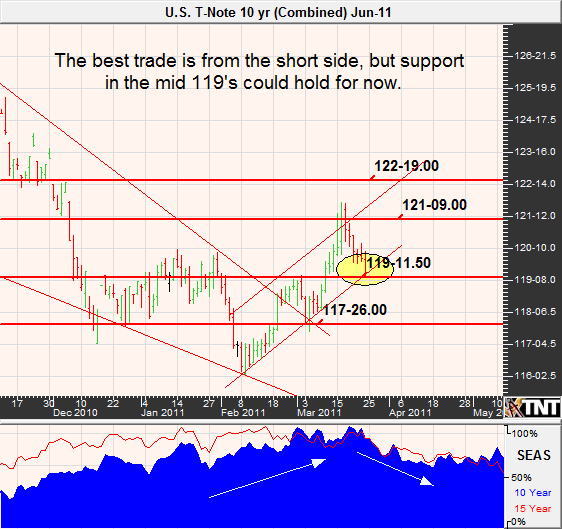 Treasury Bond and Note Option and Futures Trading Recommendations
**There is unlimited risk in naked option selling.
March 16 – Clients were recommended to sell the May 30 year bond 128 call for 25 ticks or more.
March 21 – Clients were recommended to offset their short May 30 year bond 128 call near 10 ticks to lock in a quick profit of about $235 per contract before transaction costs.
Carley Garner
Senior Analyst / Commodity Broker
DeCarley Trading
cgarner@DeCarleyTrading.com
1-866-790-TRADE
Local : 702-947-0701
http://twitter.com/carleygarner
http://www.linkedin.com/in/carleygarner
http://www.DeCarleyTrading.com
http://www.ATradersFirstBookonCommodities.com
*Due to the volatile nature of the futures markets some information and charts in this report may not be timely.
There is substantial risk of loss in trading futures and options.
Past performance is not indicative of future results. The information and data in this report were obtained from sources considered reliable. Their accuracy or completeness is not guaranteed and the giving of the same is not to be deemed as an offer or solicitation on our part with respect to the sale or purchase of any securities or commodities. Any decision to purchase or sell as a result of the opinions expressed in this report will be the full responsibility of the person authorizing such transaction.