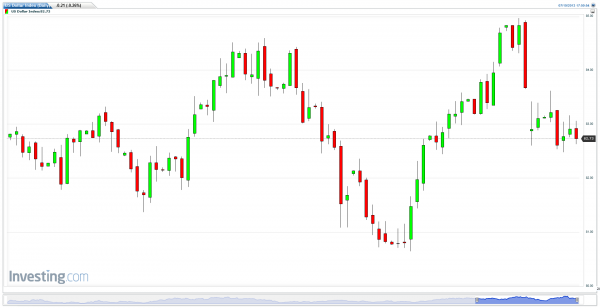 The forex market has been rocked this month. The cause? The U.S. dollar fell aggressively against major currencies. The markets aren’t expected to give the U.S. a “pass” on this either. As economic data pours in from the world’s central banks, and from the U.S.’s own Federal Reserve, expect the market to remain volatile. The U.K. and Australia are also expected to release monetary policy minutes. The Swiss National bank is set to hold a monetary policy meeting as well.

As if all of that wasn’t enough, the eurozone PMIs, UK’s retail sales, New Zealand’s GDP, and U.S. and Canadian manufacturing data are scheduled for release. All of these things will have a huge impact on the forex market for this, and the coming, months.

With that said, a lot of the volatility over the past month or so has been due to the uncertainty surrounding Fed policy going forward. It’s no secret that the Fed has been printing money and pushing it on the U.S. economy. However, there’s been a lot of talk about the tapering off of asset purchases. if that happens, the Fed’s policy will change – no longer will the U.S. be shoving dollars into the marketplace. Instead, it may choose to squeeze off the flow.

How will the markets react? Central banks are quick to respond to the rumors. Officials have stressed that a reduction in QE doesn’t necessarily equate to tightening.

For this week, the dollar’s future will hinge on what Bernanke has to say at his post monetary policy meeting. The press conference will likely be a turning point for the dollar one way or another. The central bank isn’t expected to alter its QE program, but they will release the latest economic projections as well as their future intentions.

With U.S. bond yields on the rise, what Bernanke needs to do is talk about the different conditions needed for tapering vs. a rate hike. Specifically, what he needs to remind investors that, even if asset purchases taper off, and even if the Fed slows its QE, it doesn’t mean that the money supply is tightening. Really, Bernanke could say a lot to affect the markets, but the most sensible thing to do would be to put the market at ease to avoid a panic.

Based on the most current U.S. economic reports, the Fed should be cautiously optimistic. Industrial production didn’t go anywhere in May. It fell 0.4 percent in April, and the momentum isn’t looking so hot in this part of the economy.

What’s more, consumer confidence fell from 84.5 to 82.7 this month according to the University of Michigan Consumer Confidence index. But that’s just the icing on the cake – after all, after rising to its highest level in 2007, one would expect some kind of pullback. Confidence levels never go on a permanent upward trajectory.

Now for inflation: it increased slightly last month due in part to higher cost of food and energy. Excluding food and energy, the PPI growth held steady at 1.7 percent – and with the deficit widening to $106.1 billion, Bernanke has some explaining to do to calm investors’ fears.

James Dale is a retired financial planner. He now spends his time trading commodities and he enjoys sharing his insights on various blogs. To learn How To Trade Commodities, visit this website.