Look with an unemployment rate of 7.6%, (which, by the way, is totally bogus with actual unemployment in the teens), why would anybody suggest that minimum wage be increased? The current administration is also pushing to remove unpaid internships. A possible result will be the employment of more robots and less people to do the jobs. Robots don’t need air-conditioning, health care, pensions, vacations, etc. They don’t complain or sue you so there are a lot of good reasons to hire a robot. Unfortunately Wal-Mart and McDonald’s, two examples of low wage employers, need people to work in their stores. Some of this grand standing would appear to benefit the employees, but remember that Obamacare has helped convert full-time employees into part-timers, so that businesses would not have to insure them. The question is then, how will raising the minimum wage help the economy grow? Is it possible that those few additional wage dollars will force the economy to grow or will this cost people jobs and increase the price of the products sold.

We have a comment regarding President Obama’s remarks on racial profiling regarding African Americans. It has been and still is our opinion that those who are 50 and above, regardless of skin color, gender or creed, constitute the single most discriminated against group in our country. What other group legitimately and quite openly can be singled out and labeled as unemployable, disposable and inadequate. Having lost their 401k to the tech bubble and the remainder of their savings to a collapsed real-estate market, what will happen to this group as they are forced into retirement? Perhaps it is time that we revisit affirmative action and more precisely re-examine just who we deem the oppressed minority to be.

Seniors and those at the upper edge of middle age on their way to senior status are profiled, every day and in every way. It is assumed that when you are past 50 your brains fall out and turn to mush. Seniors can’t be trained…..they all have dementia….talk about profiling! At least these “African American’s” can get jobs, seniors absolutely not! As to interns, who usually are college or graduate students, take these unpaid jobs voluntarily in an effort to meet possible employers and network with them. This activity, more often than not, leads to employment. It’s called paying your dues and with unemployment in the teens, entitlement must evaporate.

As to the rally, enjoy the benefits of zero interest and the newest bubble formation. This too will end badly. The problem is, as with most bubbles, we don’t know when that will happen. Until the market gives out, it appears that staying long with tight trailing stops is the position to have. 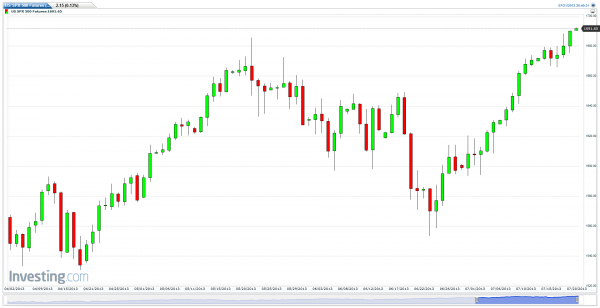 The S&P 500 tacked on another 9.25 points in the Friday session closing near the high of the day at 1689.75. The Friday high represents a new contract high for this index. Remember as you move to new higher levels, there is no overhead supply to hold the market down. There are no previous buyers there looking to exit the contract. In this sort of market, there are trend following algorithms jumping on the trend boosting the market and people rushing to cover shorts and go long. Thus there is the upside momentum, which in the end, won’t last but is unpleasant to fight. The market can retreat to 1658.10 and on a short-term basis, remain strong and in the uptrend. The Bollinger Bands are expanding which tells us that volatility is increasing. The top of the Bollinger Band is at 1706.76 and the lower edge is seen at 1561.93. The 5-period exponential moving average is at 1678.31. The stochastic indicator, the RSI and our own indicator are all pointing higher at overbought levels. Remember that although we are overbought we can remain overbought for extended periods of time. Being overbought does not mean that you are going to sell-off. It simply alerts you to the changes occurring in the markets. We are above the Ichimoku Clouds for all time-frames. We have horizontal support lines at 1674 and 1648.31. The uptrend line is at 1664.98 for the Monday session. 7.9% of Friday’s volume was seen at 1683. This indicates that there is support at that level; further evidence provides that the longs will become less comfortable below that level; however, they likely will not sell until the market sells below 1675 and certainly below 1660.75. On the other side, above 1690.50, it is likely that the market will move higher as trend following systems jump on board the trade. Of the past 19 trading days only two of those days have been days where the market closed below where it opened. Make no mistake that although we are overbought and having trouble moving higher, this is a strong market where buyers will appear on dips. The only thing that could dissuade the buyers is if an event were to occur that would put fear into this fearless market. It would be much healthier for the market to pause, back and fill at this level. Unfortunately, the market doesn’t care what we think and will do as it will. At this time the uptrend resembles a pole. As you know, poles are difficult to measure. The 0.75% by 3-box point and figure daily chart has absolutely no downside targets and no downtrend lines to be found. The 60 minute 0.1% by 3-box point and figure chart also has no downtrend lines to be seen.

The NASDAQ 100 retreated 0.08% or 2.50 points in the Friday session. This indicates a major divergence between the S&P 500 and the NASDAQ 100. So what blew up the NASDAQ 100 on Friday? Let’s start with AAPL down 1.58% accounting for 5.69 points in the NASDAQ 100, eBay down 2.49% or 1.54 points Intuitive Surgical down 6.83% or 1.03 points in the NASDAQ 100, and the big drop in MSFT of 11.4% taking 30.07 points away from the NASDAQ 100. We are above the Ichimoku Clouds for all time-frames. The two-day retreat is troublesome and shows how sensitive earnings miss in a heavily weighted issue will affect the index. We do have signs of exhaustion in this index and all indicators that we follow are pointing lower with plenty of room to the downside. The Bollinger Bands are beginning to contract ever so slightly indicating that perhaps some of the volatility is leaving the market. The upper edge of the Bollinger Band is at 3121.86 and the lower edge is seen at 2822.43. The 5-period exponential moving average is at 3050.22. The Market Profile chart tells us that if this market can trade up to 3049.50 it will go back to the 3075 area. The daily 1% by 3-box point and figure chart remains positive; however, the 60 minute 0.1% by 3-box chart has an internal downtrend line and is somewhat less bullish.

The Russell 2000 did not make a new high in the Friday session but did make a new high in the Thursday session. The chart really looks like a pole with multiple signs of exhaustion. The stochastic indicator and the RSI remain bullish but both are extremely overbought, a condition that began on July 5th for the stochastic and a day or so latter for the RSI. Our own indicator continues to look fairly flat yet somewhat overbought. The Thomas DeMark Expert indicator is flat at neutral. We are above the Ichimoku Clouds for all time-frames. The 5-period exponential moving average is at 1042.07. The top of the Bollinger Band is at 1067.20 and the lower edge is seen at 941.87. This reflects a very wide Bollinger Band. The Market Profile chart tells us that above 1051.50 there is no supply and it should be fairly easy for the market to drift higher from that point as trend following systems jump on the band-wagon. 19.2% of the day’s volume was seen at 1048. A rather big concern at the moment is the lack of volume seen since the beginning of July. The daily 1% by 3-box point and figure chart continues to look very bullish with no current downtrend line and no current downside targets. When you look at the 60 minute 0.1% by 3-box chart you see a downside target of 1029.2 and a downtrend line. Caution flag has just been dropped.

Crude oil is overbought and has been overbought since June 28, 2013. We are above the Ichimoku Clouds for all time-frames. The up trending channel lines are 110.97 and 103.84. Our upside target is 110.55. Although the indicators are overbought and continue to be overbought we continue to see buy-signals. At this level, we do advise caution insomuch as we could retreat back to our breakout level at 105.5 and then retreat to 98.89. The 5-period exponential moving average is at 107.25. The top of the Bollinger Band is at 111.13 and the lower edge is seen at 93.11. The Market Profile chart shows that much of the trade was to the upside. Also tells us that above 109.25 there isn’t much holding this market down. We are grossly overbought and it is likely that, at best, we will back and fill. The 1% by 3-box daily chart has an upside target of 117.47. We do not have any downside targets and there are no downside lines. Even the 60 minute 0.75 by 3-box chart is bullish.

Gold rallied in the Friday session kissing the downtrend line at 1297.53. The upward pointing channel lines are 1345.52 and 1270.66. The 5-period exponential moving average is at 1284.19. The top of the Bollinger Band is at 1309.76 and the lower edge is seen at 1208.01. We are below the Ichimoku Clouds for both the daily and weekly time-frames and are inside the clouds for the monthly time-frame. We do have an upside target on the 0.3% by 3-box 60 minute point and figure chart of 1489.28. The 1% by 3 box daily point and figure chart has a major uptrend line which we have been able to defend. There are several internal downtrend lines in our path to the upside. We have several internal downtrend lines and a rather major downtrend line as stumbling blocks to your upside progress. Our first goal will be to close above the downtrend at 1297.53. A major resistance line is at 1390.05. All the indicators that we follow herein are pointing to higher levels.

The US Dollar Index closed the Friday session down for the day at 82.71. We saw the index break above the gap briefly on Monday only to see the longs come in and use this opportunity to close out their positions. The Bollinger Bands are contracting as volatility has calmed with the upper band at 84.64 and the lower band at 82.15. The 20-period simple moving average is 83.40, the 5-period exponential moving average is 82.93 and the index is currently below both. The RSI is point down after failing to break above a high and our own indicator continues to issue a sell-signal. On the daily chart we can see the market is constrained by resistance at 83.41, marked off by last week’s gap, and support at 82.39, a level created by the February and March congestion. Within that support zone, 83.64, the low from July 10th, has been holding this market up.

The 60 minute .05 x 3 Point and Figure chart shows the index is riding the uptrend line. There are currently three activated targets, one to the upside at 83.20, a newly activated downside target at 82.05 and 78.4. It is worth mentioning this double bottom has also broken a short term subjective uptrend line. Looking to the weekly chart we see support at 82.07 followed by 81.79. The market has currently retraced a little under 38.2% off of the July 5th high. We are not receiving terribly strong signals this week, however; we err on the side of a bear move near the 50% retracement level.

Dollar Dash: Will Bernake Bring Too Much Information to the Forex Table?
Gold – A Final Push or Just the Beginning?