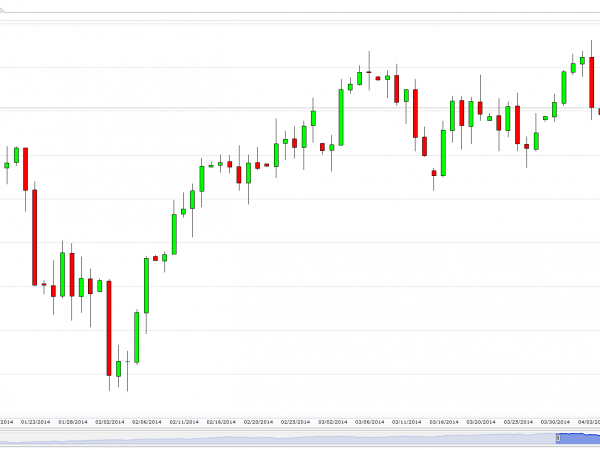 The bull market in US equities continues. While many pundits are calling for a top, and we agree that there are ominous signs in this aging bull market to support that opinion, we must remind our readers that markets tend to move directionally and generally resist change. A bull or bear market can continue longer that you would have believed possible! We cannot predict the movements of the markets but can understand its action when looking at the behaviors demonstrated in the past and that understanding guides us as to the probability of similar future behavior. Investors continue to search for yield which is supportive of defensive stocks. The risk on trade is in the market but not in its prior frothy state. The difficulty many have is that there is no real concrete alternative to investing in dividend paying stocks. We recommend that caution should be the by-word. Make no mistake, this market will retreat and fall at least 10% if not 20% by the time this cycle is over. The question is when not if but when. Let the market tell you when to leave and when to go short.

We see a huge problem in the ETF community which has expanded to unimaginable highs. What happens when the market dumps? What will happen to these ETFs? Will there be enough liquidity to provide an orderly market? These are some really good questions. Remember also that ETFs are made up of real stocks, commodities, bonds and indices thus when they liquidate those very securities, their portfolios are liquidated as well. Be worried and hope that the retreat will be orderly. Remember the “flash crash of May 2010” because it can and likely will happen again. Our recommendation is to avoid thinly traded ETFs and those with diminished liquidity. You have been warned! 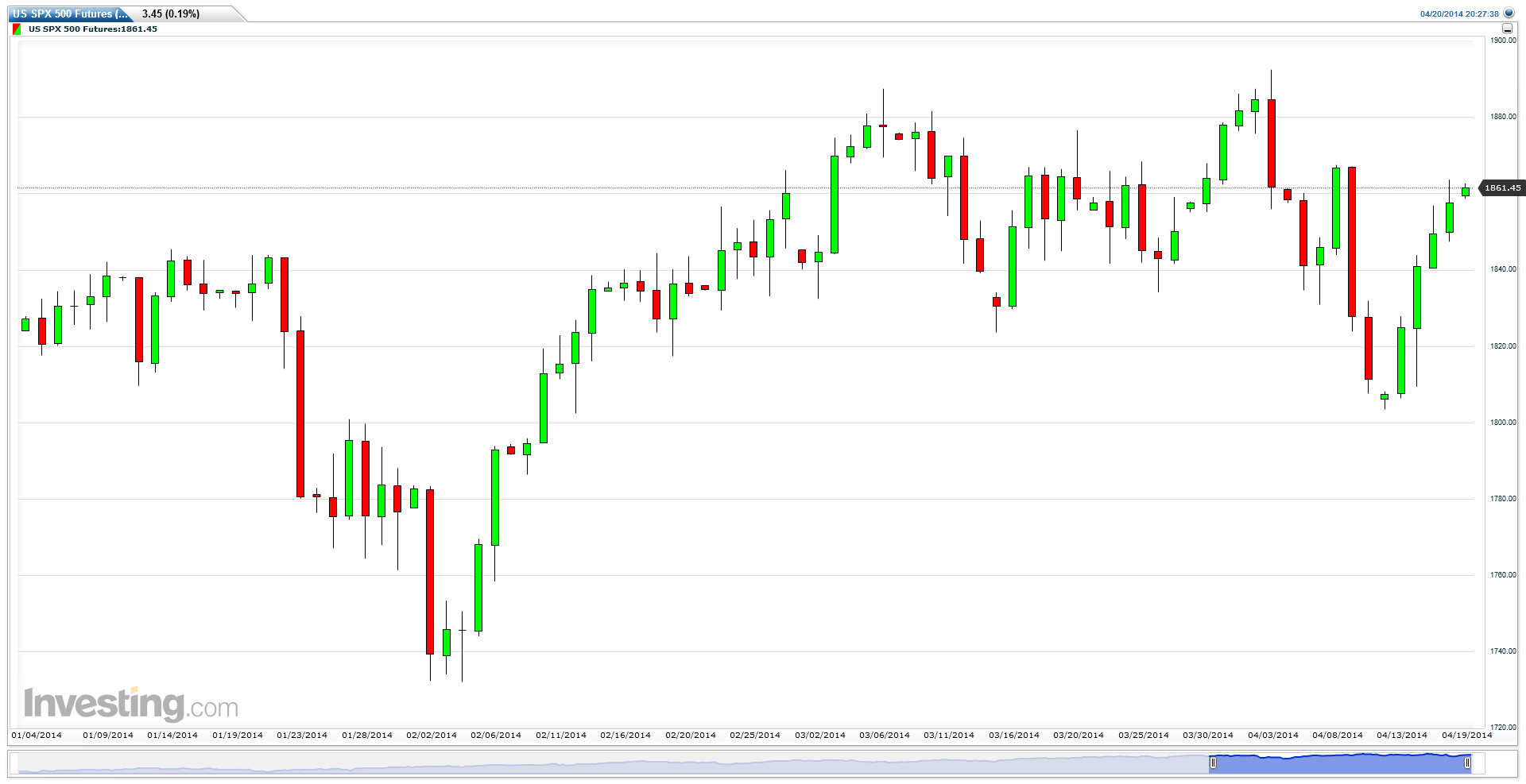 The pattern on the chart of the S&P 500, could be “read as a head-and-shoulders pattern with a broken neckline projecting a drop to 1712.25 which would be a 10% drop in this future’s contract.” Option Queen Letter April 13, 2014. The market continues to work on this pattern, a work in progress. We must admit that if you were short last week, you had a fair amount of pain on that trade. That said, we believe that the market will retreat, most probably in the Tuesday session or even as early as the Monday session. We are ripe for a pull-back.

The S&P 500 rallied for the entire week taking back most of the losses seen in the previous week. As we have frequently pointed out, downdrafts are much faster than up thrusts and this can easily be seen in the past two week’s action. It took the market four days to almost regain the losses of two days. No, this isn’t a commentary on the market but rather a commentary on how downdrafts vs. updrafts work in the S&P 500. All the indicators that we follow are pointing higher. We do have room on the upside but believe that by the end of Monday if not Tuesday, that we will see some retreat in this market. The volume on Monday was about average, Tuesday a bit below average, Wednesday a bit above average and on Thursday (a pre-holiday session) a below average. Given that it was a holiday week, we can understand the lightish volume on get-away Thursday. The 5-period exponential moving average is 1846.35. The top of the Bollinger Band is 1888.06 and the lower edge is seen at 1814.80. At this time, the Bollinger Bands have a flattish look to them and indicate to us that we are somewhat range-bound. The daily 0.9% by 3-box point and figure chart shows a market without a downtrend line in sight. We do have a fresh downside target of 1651.94 but also an upside target of 2220.26. The volume has been light in this area of the chart. The 60 minute 0.1% by 3-box chart shows a bullish market leaning on the upper Bollinger Band with an upside target of 1933.75. The Market Profile chart shows us that the action in the Thursday session was almost entirely to the upside. The close did look like position squaring in front of the Easter Holiday.

The NASDAQ 100 rallied for the entire pre-Easter Holiday week although the Tuesday session did have some scary moments for the bulls. All the indicators that we follow herein are pointing to the upside with plenty of room to run further. The 5-period exponential moving average is 3505.00 and the 50-period simple moving average is 3621.35. We mention that average because it is used by many portfolio managers as an important level. We also remain below the 100-day exponential moving average which is 3533.06. The top of the Bollinger Band is 3684.33 and the lower edge is seen at 3431.24. The daily 1% by 3-box chart has a downside target of 2922. We have a downtrend line which will cause the rally some trouble. We have an RSI pointing lower thus, caution is advised. Before you get too bearish, the 60 minute 0.25% by 3-box chart shows a different picture. We have broken above the downtrend line and have an internal uptrend line as well as an upside target of 3704.24. The RSI is pointing high for this time-frame.
The Market Profile chart shows that we closed in an area considered to be fair value, right in the bulge of the chart. We remain below the Ichimoku Clouds for the daily time-frame but above the clouds for the weekly and monthly time-frames.

We are reporting on the MidCap index this week rather than the Russell 2000 due to technical difficulties with the Russell 2000. The MidCap index rallied for each trading day last week. The indicators that we use all are pointing higher with plenty of room to the upside. The market did close below the 50 moving average after piercing it briefly during the day session. The 5-period exponential moving average is 1339.88. The top of the Bollinger Band is 1397.85 and the lower edge is seen at 1312.86. The daily 1% by 3-box chart has an internal downtrend line which could be removed shortly. More importantly the volume has all but disappeared for this index. We have no downside targets for the daily time-frame. The 60 minute 0.2% by 3-box chart has a downside target of 1244.98. The 0.1% chart has an upside target of 1410.04. We are inside the Ichimoku Clouds for the daily time-frame and above the clouds for both the weekly and monthly time-frames. Both the weekly and the monthly charts are very positive.

Crude oil rallied in the Thursday session and left an inside day on the chart. Although our own indicator continues to issue a sell-signal both the RSI and stochastic indicators, which are at overbought levels, continue to issue a buy-signal. The 5-period exponential moving average is 103.8. The top of the Bollinger Band is 105.05 and the lower edge is seen at 98.12. We are above the Ichimoku Clouds for the daily and weekly time-frame but are in the clouds for the monthly time-frame. The indicators are positive for both the weekly and the monthly time-frames. The 60 minute 0.7 by 3-box chart has an upside target of 112.45. The chart looks very positive. The daily 1% by 3-box chart has an upside target of 137.75 and shows that we have crossed above the downtrend line. Crude oil continues to look good although it would be healthier for this market to back and fill before proceeding to the upside.

Gold rallied in the Monday session then quickly changed directions on Tuesday to the downside plunging to 1284.44 before closing that session at 1302.24. It was truly Mr. Todd’s wild ride. Both the Wednesday and Thursday sessions were much less dramatic although they were to the downside. All of the indicators that we follow herein continue to point to the downside although with much less momentum then previously seen. Actually they look rather flat. The 5-period exponential moving average is 1300.75. The top of the narrowing Bollinger Band is 1325.42 and the lower edge is seen at 1278.26. The 60 minute 0.4% by 3-box chart has a downside target of 1098.83. That said, we continue to trade above the uptrend line. The daily 1% by 3-box chart has an upside target of 1812.66 and internal upside and downside lines. The RSI is pointing lower thus it is rather unclear. So long as gold does not close below 1284.44 we will stay neutral on this market. Under the 1284.44 level we believe that the market will test 1277 and then1255 with a liability to 1238.

The US Dollar Index gapped higher in the Monday session opening on top of our 79.61 support line having bounced off of the uptrend line at 79.37. This market is coiling into a triangle and will eventually pop one way or the other. The Bollinger Bands are steady with the bands ever so slightly turning inwards. The upper band is 80.50 and the lower band is 79.43. The US Dollar Index is above the 5 period exponential moving average, which is 79.83, and below the 20-period simple moving average which is 79.97. Both our indicator and the RSI are issuing buy-signals. Looking to the daily chart we can see last week’s rally was less than convincing. Typically, when coming into contact with a major uptrend/downtrend line, this market explodes in the opposite direction. Although we saw a gap higher on Monday, the rest of the week sort of drifted higher. The next support points are above at 80 flat followed by 80.24, the last of which happens to coincide with the downtrend line.

The 30 minute .05 x 3 point and figure chart is showing the index to be in a down trend with one unactivated downside target at 77. Be that as it may, the Index has formed two counter trend internal trend lines and has an activated upside target at 80.75 that has been confirmed by a triple top (this is a buy signal in point and figure talk). Down to brass tax, what this is telling us is that while although the Index is in a downtrend it is going to continue to bounce, so sayeth the point and figure chart. The weekly candle chart is showing we are in between support and resistance at the moment. We think it is likely that the Index will rally back to the broken downtrend line, close to the 80.24 level mentioned earlier.

Flight out of Safe Haven
As Temperatures Rise Where Will Heating oil prices go?