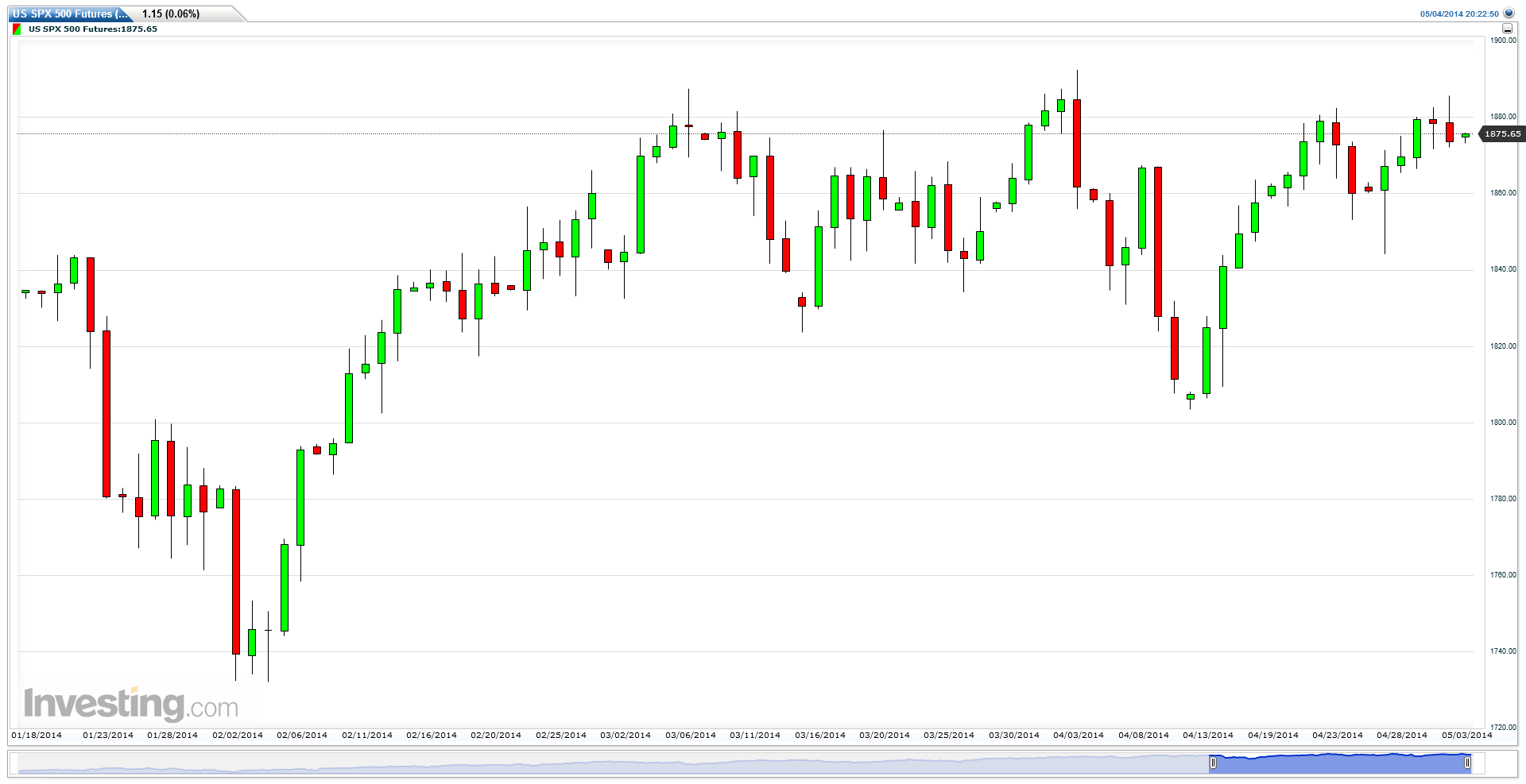 The recent data release from the bureau of Labor statistics (BLS) on Friday shows that there was no wage growth in the April reporting month. The actual facts are that there has been no upward movement in wages for years, when considering inflation yada yada. Will a minimum wage hike help; we seriously doubt that is will help the general masses. What that action will do is to encourage purchases of technology to replace the humans that can be replace and that currently have jobs.

If wage growth stalls, so stalls the ability for the middleclass wage earner to pay higher interest rates on their mortgages. This action will slow down the already slowing real-estate market and the middleclass earners ability to purchase discretionary items. Thus in a long run, an increase in interest rates must be accompanied by an increase in wages, not just at the top of the food chain but also at the bottom. Without that, little will change. That said, this is not an argument for higher hourly wages but rather an observation. Higher wages do flow into costs of items which, if they are not bought by consumers, cannot be sustained. We are basically chasing our tails. Unless wages improve, economic expansion will stall. If wages improve, interest rates will raise, which will curtail sales. What are we missing with the picture?

The good news in this scenario is that if interest rates begin to ratchet up, it indicates that the economy is expanding or…..inflation is getting out of control. There is yet another scenario but one that is not likely, that is that lenders will demand higher interest on their loans that would push interest rates higher. Such action generally occurs with country’s that are in turmoil or have sovereign risks. Here in the USA that is not the case, thus, interest rates remain low. We are not sure about inflation although there has been real inflation in costs of things such as food and necessities of life, but the government does not measure those changes and thus inflation is recorded as tame.

What the investor need remember is that there action is among different assets which play on the values of those assets. This is a great time for the serious investor to review and re-read John Murphy’s books on intermarket analysis. You will come away understanding that “no asset is an Island” okay that is a botched quote but we are sure the message is clear.

Part of the solution to many of these problems is thinking things out. For example, if you raise the minimum wage, will those jobs go to machines or, perhaps “off the books” workers who are willing to work for cash at a much lower rate of compensation? Are we curtailing expansion by making the cost of additional workers more expensive and what about all those who pay no taxes. Wouldn’t it be a better idea to solve that problem first? There is an ever growing underground society of those who work for cash. Yes, there has always been that group but it is now expanding. Some of our citizens have figured out that to work for a little less and get it in cash is better for the bottom line than charging more and paying tax on that money. The problem with the lawmakers is that they don’t think beyond the law. They need to abstract their thoughts and think like a chess player, if we move here what are the next moves our opponent will likely make?

The S&P 500 reacted to the release of the April “Job’s Report” with a rally. Within five minutes of that rally the index reversed course and printed a low then continued to bungee jump back and forth finally opening at 9:30 at 1877.50. The rest of the session demonstrated that both bulls and bears were correct or better stated; both sides had an opportunity to make money on the day-trade. As the day wore on the looming weekend and continued hostilities in the Ukraine overshadowed any good sound bites initially seen and the market closed the day very modestly lower. Shakespeare would have called it; “Much Ado About Nothing” or a perfect Seinfeld’s sitcom about nothing. The 5-period exponential moving average is 1873.88. The top of the Bollinger Band is 1895.75 and the lower edge is seen at 1819.34. We are in a clear box or rectangle (trading range). We have seen the index make 11 attempts to take out the high printed on April 4th. All attempts so far have failed. The fact that it has failed does not imply that it will not be attempted and perhaps succeed on the next upward thrust. We do know that should it succeed in that thrust upward that it likely will move like a rabbit higher. On the other hand should the index close below 1804, look out below. It should be mentioned that there has been light volume in recent days. There are two uptrend lines a longer line at 1826.62 and a much shorter line at 1871.54. Volition of these lines will lead to action on the downside. The overhead horizontal line is 1886. The stochastic indicator, our own indicator and the RSI are all pointing lower. There is no real direction demonstrated by the recent action we are coining and we suspect that a resolution to that coil will occur fairly soon. That said, please go with the trend and do not fight it. The 1% by 3-box point and figure chart supports the coiling theory. We continue to have a downside target of 1673.96, not a single downtrend line and all uptrend lines. We do show light volume in our current area of the chart. The 60 minute 0.1% by 3-box chart is a bit more interesting in that we have a really viable downside target of 1856.11 and upside target of 1906.88. This chart has an uptrend line and an internal downtrend line. The sum and substance of this analysis is to be careful, don’t fight the trend and stay very nimble.

The NASDAQ 100 rallied in four of the five trading sessions this past week, ending the week with a retreat. Global anxiety creates an environment which encourages people to flatten positions over the weekend. We closed inside the Ichimoku Clouds for the daily time-frame but above the clouds for both the weekly and monthly time-frames. The daily chart shows that we are in a downtrend, however; both the weekly and the monthly charts illustrate a market in a long-term uptrend. The 5-period exponential moving average is 3574.26. The top of the Bollinger Band is 3628.11 and the bottom edge is found at 3452.03. The downtrend channel lines are 3604.22 and 3379.30 the internal uptrend line is 3515.20 and a steeper line at 3552.21. The channel lines are a bit steep and we would use 3480.50 as a line in the sand for the bulls. Should that level fall than it is likely that 3425 and3404 will not be far behind. The stochastic indicator, our own indicator and the RSI all are pointing lower. The daily 1% by 3-box chart shows a clear pennant with several internal uptrend lines and a proper downtrend line. We do have an upside target of 3978.36. The 60 minute 0.2% by 3-box chart has an upside target of 3698.88.

The Russell 2000 actually fell in the Friday session but was exceedingly muted or shallow leading us to believe that the lion’s share of the trade must have been short and in an attempt to cover their positions bought the index. The session left a doji like candlestick on the chart with a higher high and a higher low. We remain within the down trending channel lines which are 1139.56 and 1070.30. We are below the Ichimoku Clouds for the daily time-frame but above the clouds for both the weekly and the monthly time-frames. The 5-period exponential moving average is 1123.74. The top of the Bollinger Band is 1158.67 and the lower edge is seen at 1102.20. The indicators that we follow continue to point lower but with less momentum.

Crude Oil rallied in the Friday session gaining 0.57% on the day. We remain in a downtrend a closer to the lower edge of the Bollinger Band than its moving average. The RSI is curling to the upside as is the stochastic. That said the stochastic indicator has not issued a buy-signal although the fast stochastic is. We are inside the Ichimoku Clouds for the daily and weekly time-frames but above the clouds for the monthly time-frame. The 5-period exponential moving average is 100.12. The top of the Bollinger Band is 105.27 and the lower edge is seen at 98.80. Bottom line is: as long as we are below the 5-period exponential moving average we will side with the bears on this one. The downdraft has been steep and thus we can expect to see some backing and filling. This past week’s action took us below the medium term downtrend line putting a bearish hue on this product. We need to close above 100.80 to even begin thinking about the bullish side of the trade. The down trending channel lines are 100.80 and 97.86. The daily 1% by 3-box point and figure chart continues to have an upside target of 137.75 but in that wake a strong downtrend line is in place. The 0.2% by 3-box 60 minute point and figure chart paints a very different picture. We have a down side target of 92.71 as well as an upside target of 101.84. Both targets make a lot of sense when looking at this chart.

Gold rallied 1.16% in the Friday session. Gold printed a higher high and a lower low leaving a very large trading range for the day. We remain below the Ichimoku Clouds for all time-frames. We kissed the top edge of the down trending channel line in the Friday session. The channel lines are 1305.13 and 1259.76. We remained above the horizontal line in the sand at 1269.70. The 5-period exponential moving average is 1293.93. The top of the Bollinger Band is 1322.90 and the lower edge is seen at 1276.81. All the indicators that we follow herein continue to point higher. The daily 1% by 3-box point and figure chart has an upside target of 1867.58 and a very viable downside target of 1091.25. The 60 minute 0.3% by 3-box chart has an upside target of 1365.37 and a downside target of 1203.95, both look possible. The chart looks as though the product is consolidating.

The US Dollar Index retreated on the Friday session losing 0.01% of its value. The 5-period exponential moving average is 79.81. The upper edge of the Bollinger Band is 81.45 and the lower edge is seen at 79.19. The down trending channel lines are 80.68 and 78.77. The short-term uptrend line is 79.40 and the shorter-term downtrend line is 80.28. So here is what all those numbers mean. For the shorts to become interested in covering their positions, the US Dollar index will have to cross and stay above 80.28. For the short to become really worried the US Dollar needs to close and stay above 81.45. Should this occur, expect to see a violent upside burst in this market. As to the indicators, the stochastic indicator and the RSI continue to point lower but our own indicator is issuing a buy-signal. We are below the Ichimoku Clouds for all time-frames. The 60 minute 0.1 by 3-box chart has a downside target of 77.2 and an upside target of 80.9. It isn’t clear which way this index will break, so expect to see more backing and filling.

Natural gas – Will Prices Follow the rest of the Complex Lower?
For the Ladies – Gold and Cotton