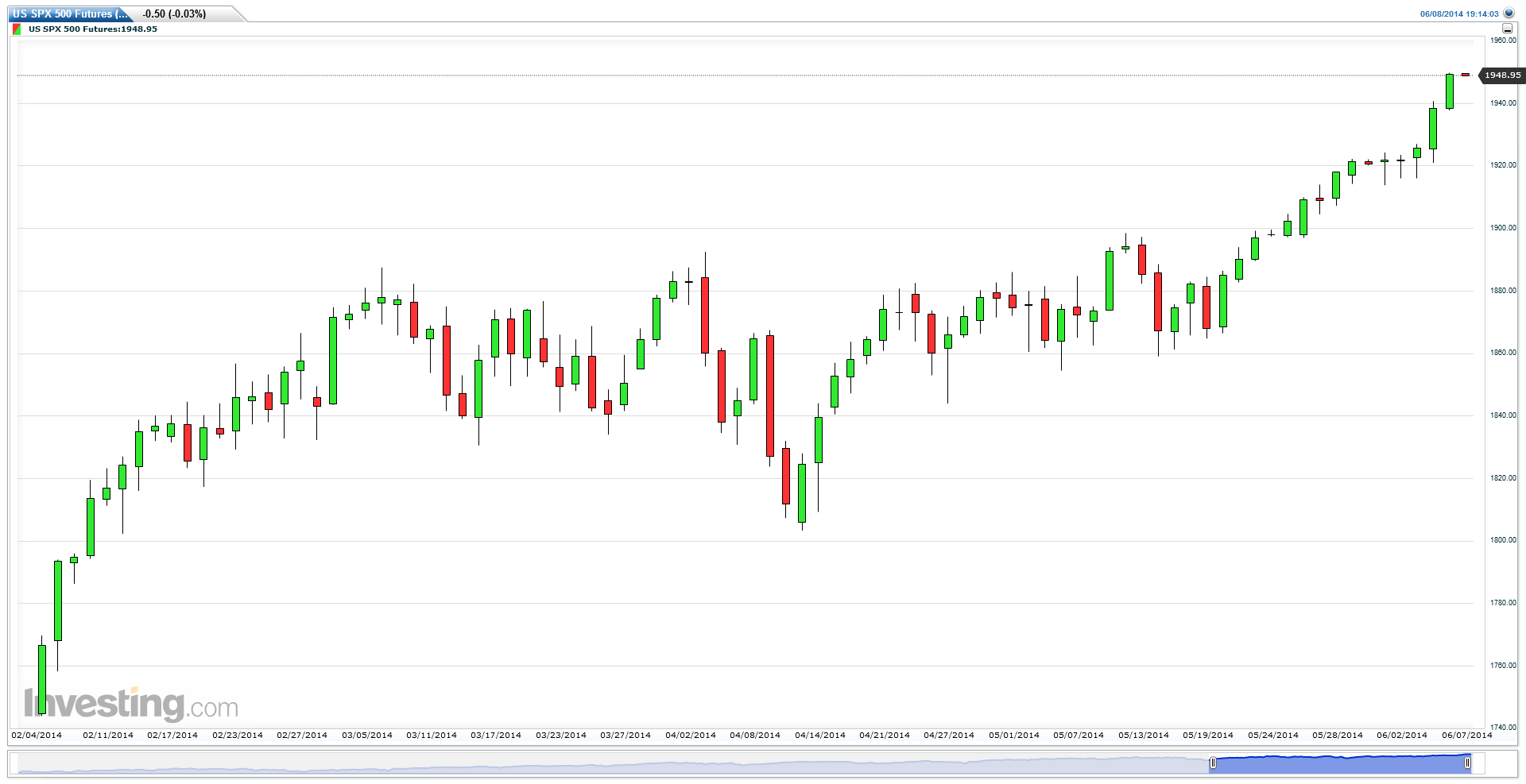 The headline front cover of Barron’s this week is: “The New Face of Wall Street.” This is a bit scary in that when Wall Street makes radical changes they appear at times when a trend is ending. Mortgage bundling was a New Face, that didn’t turn out well for the public and the country. Just saying, when a new era shows up, duck and cover.

The ECB went to negative on Thursday, -0.10 for reserve balances, in an effort to spur lending. We here in the USA will be the beneficiaries of this insomuch as our interest rates are higher than even the riskiest bonds in the Eurozone. The risk off trade is on with the ECB’s approval and investment dollars will likely flow to our shores. We understand that this is an effort to increase the velocity of money, which currently is crawling along at a snail’s pace, but we wonder how much of this will ever seep through to where it would do some good. If the USA were used as a model, one would soon realize that it doesn’t work.

The bullish sentiment rose to more than 62% this past week with the bears staying steady at 17.4%. The correction camp shed some fence sitters who jumped on the bull’s back. Yes it can continue for a while but is becoming a little frothy. The media has been speaking about the low VIX as though a change to the upside will happen any second now. We can point to 2005 and 2006 when the VIX remained at extremely low levels and 2003 and 2004 where it decayed leading up to the 2005-6 absolute lows. This can take years not days to resolve.

Reminder: financial futures roll this week to the September contract. The roll is Wednesday and on Thursday the front contract will be September. We alert you to this because many trader go into the roll short June and this could, and many times does, cause a pop to the upside as the June is bought and September is sold. You will see the volume migrate out of the June contract. Yes the contract trades until its expiration on Friday June 20, 2014. Remember you cannot trade the contract on Friday because the price of the contract is based on the opening price of the instruments in the contract for settlement purposes. You can trade the September future’s contract.

The S&P 500 futures contract rallied 0.58% in the Friday session tacking on 11.25 handles or points. Initially the reaction to the Jobs report was somewhat muted but then, the market rallied. We did see a fresh new high in the session which closed on that high. Are we overbought? Yup we are but that never stopped a bull market. Can we go higher? Sure, but we will likely correct shortly. The buy-the-dips crowd is back therefore do not expect to see huge sell-offs in this market.

The 5-period exponential moving average is 1933.82. The top of the Bollinger Band is 1947.80 and the lower edge is seen at 1854.71. We are above the Ichimoku Clouds for all time-frames. For the last seven trading days, this index has closed higher than it opened. Yes we have a doji candlestick in the mix but the direction has been to the upside. All the indicators that we follow herein continue to point higher and are at overbought levels. That said, there isn’t a bend to be found in any of them. The market is beginning to have pole like qualities which, is troublesome. However, go with the trend and just tighten up your stops so that you exit quickly on a downdraft. At this time, we know the market will retreat within the next few sessions. That retreat may just be a one-day-wonder to purge some of the overbought condition. We shall see how this plays out will be able to judge if the market is fully engaged in upward movement. The 60 minute 0.1% by e-box chart has an upside target of 1968.86. The RSI on this chart is overbought but pointing higher. We closed above the upper Bollinger Band both on the 60 minute point and figure chart and on the candlestick chart. This indicates that either the volatility will expand to accommodate the increased average range or, that we will return inside the upper band. We are inside the Bollinger Band on the daily 1% by 3-box chart and have an upside target of 2278.81. The chart looks very positive for now. The high volume area for this index in the Friday session was 1946.25 where 19.7% of the day’s trades occurred.

NASDAQ 100 printed a new high for the year and for this bull cycle. Remember that the old high, printed in 2000, was 4884.00. The daily chart of the NASDAQ 100 is a great example of what a bull flag looks like. We are on the next level higher building another pole which began on Thursday. The 5-period exponential moving average is 3764.06. The top of the Bollinger Band is 3813.59 and the lower edge is seen at 3537.75. All the indicators that we follow herein continue to point higher even at overbought levels. The stochastic indicator has been overbought since May 20, 2014 and the RSI has been overbought since May 23, 2014. We call this, bullishly overbought. As they say, it isn’t over until the fat lady sings and she hasn’t sung as yet. Eventually this market will revert to the uptrend line which on today’s chart is at 3634.07. In the Friday trading session 22.1% of the trades occurred at 3790. The daily 1% by 3-box point and figure chart has an upside target of 3978.36. The 60 minute 3-box point and figure chart continues to look positive. The volume on this index was less than expected on this upward thrust although the volume in the Friday session as great than the volume in the Thursday session. Keep your stops tight and don’t be afraid to take profits.

The Russell 2000 enjoyed a robust rally in both the Thursday and Friday sessions. This index did not post a new high but did break out of its trading range to the upside. The upward pointing channel lines are 1122.01 and 1167.65. The index closed just below that upper channel line in a strong finish to a strong day. Although this index is overbought as measured by the stochastic indicator and the RSI, it is not as overbought as the S&P 500 and NASDAQ 100 are. This rally has come from the neutral level and has recently become overbought while the other two indices have been overbought for some time. The 5-period exponential moving average is 1146.97. The top of the Bollinger Band is 1161.43 and the lower edge is seen at 1085.38. The Bollinger Bands continue to expand and we did see the index close above the upper band. In the Friday session 33.5% of the trades occurred at 1163.75. Caution is warranted, keep your stops tight and don’t be a hero.

Fundamentally, this past week’s news should be good for the economy if, and only if you believe that the ECB’s measures will work, we don’t believe that. We do see an improving, marginally improving, economy here in the USA that said, it supports the case for higher crude prices. We send you back to John Murphy’s book on Intermarket Analysis which clearly maps out how markets are inter-related. Remember the US Dollar and crude oil are linked and that crude trades in US Dollars. We are above the Ichimoku Clouds for both the daily and the weekly time-frames but are in the clouds for the monthly time-frame. The monthly chart clearly shows us how narrow the range is becoming. The 5-period exponential moving average is 102.71. The top of the Bollinger Band is 104.86 and the lower edge is at 100.54. The Bollinger Bands are becoming narrower. The daily 1% by 3-box point and figure chart has an upside target of 133.7. The chart does look positive. The 60 minute 3-box point and figure chart does have an upside target of 104.76 but also has a downtrend line which should be respected. We have mixed feelings about that chart. Something is going to give here and if we continue to compress the action, the downtrend and uptrend lines will meet on June 18th after which we will see a violent move in one direction or the other. That date has a fudge factor of one or two days and clearly the price must stay between the uptrend and downtrend lines. It should be interesting. The stochastic indicator, our own indicator and the RSI are now pointing to the upside. Do not fight the trend.

Gold retreated in the Friday session losing nine dollars on the day. The 5-period exponential moving average is 1251.36. The top of the widening Bollinger Band is 1319.97 and the lower edge is seen at 1231.46. The horizontal line sits at 1240.20. We note that this market can test the 1231 level without doing much damage. Both the RSI and the stochastic indicators are curling over. Our own indicator continues to issue a buy-signal. The market looks like it is trying to rally, but caution is warranted. The 1% by 3-box point and figure chart has both upside and downside targets. The downside target is 1113.19 and the upside target is 1812.66. We have both internal uptrend and downtrend lines. The 0.25% by 3-box chart has a downside target of 1237.81 and no current upside targets. We have no uptrend lines and do have downtrend lines.

The US Dollar index fell in the Thursday session and rallied in the Friday session. The RSI continues to point higher but both our own indicator and the stochastic indicator have turned down and have issued a sell-signal. The 5-period exponential moving average is 80.49. The top of the Bollinger Band is 80.76 and the lower edge is seen at 79.88. The Bollinger Bands are contracting indicating to us that the volatility is diminishing. We broke below the short-term uptrend line and the current downtrend line is at 80.624. Should this index close above that line we will rally to 80.73 and above that, the high seen on Thursday of 81.065. It is likely that we will test the horizontal line at 80.21 and should that fail, we will fall to the 79.93 area. The daily 0.4% by 3-box point and figure chart has a downside target of 75.74 and lots of trades at the 79.46 level which, this market must stay above. The 60 minute 0.1% by 3-box chart has an upside target of 82.499.