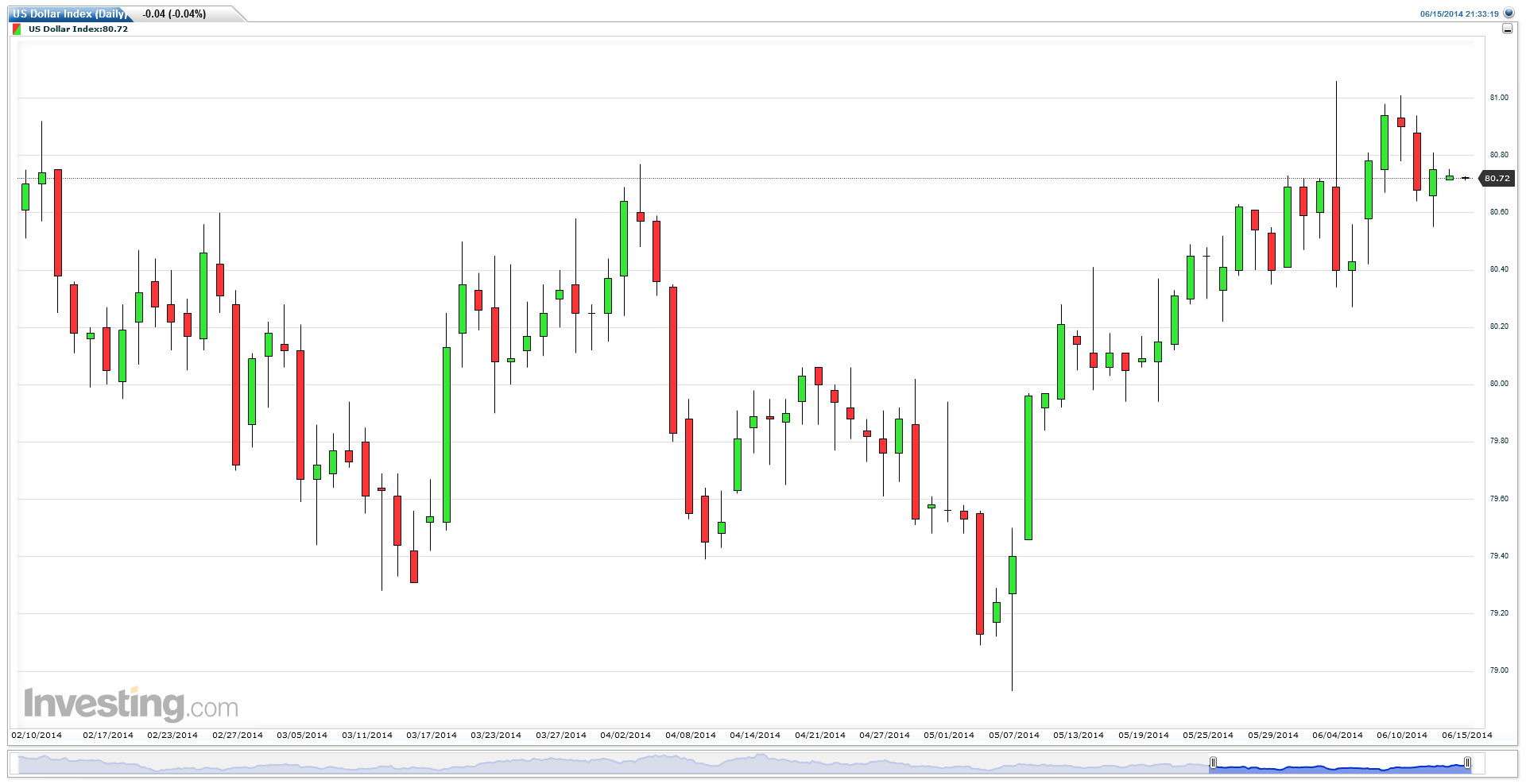 The business press attributed the nervousness seen in market prices this past week to the various global conflicts grabbing the headlines. The media always has to have an actual reason for market retreats when in actuality, the markets took a breather and gave back all of the previous week’s gains. Markets go up and they go down keeping both bulls and bears happy and off balance. The only actual effect on the markets from the Middle East turbulence was seen in the crude oil market. The spread between West Texas Intermediate and Brent widened reflecting the fear of shortages in Europe which is dependent on Brent.

This past week we had the future’s market roll next week we have options expiring, a quarterly witch, all of which adds angst and volatility to the markets. The downdrafts seen in the markets this past week were predominantly on the roll days, exiting and entering on Wednesday and Thursday. The volume actually shifted on Thursday.

A few thoughts about disposable income and consumer spending: as we chug along with very modest economic expansion it is important to understand that for this economy to expand, consumers must spend money. For consumers to spend money, they must make earn enough income to pay the costs of staying alive and then have extra money to spend on discretionary items. To date, when we look at the average earner’s income we see that, after inflation is accounted for, that earnings have not kept up with costs. The bottom line is, that people, not the upper income types, buy the average guy or gal on the street, has less money in their pockets than their parents had and thus the ability to go out and splurge is not there. For this economy to expand, the average guy on the street, again not the upper earner or the bottom earner, but the average earner has to make more money or the cost of living must go down, something that likely will not happen. For employers to pay their workers more money more income must be made and more stuff sold. Here is the result of this conundrum. The high earners are spending, the bottom income people are surviving the middle class is struggling so no growth is occurring. Until we solve for this we will be stuck.

The S&P 500 rallied in the Friday session closing the week on an up-note. This market remains above, far above both the medium-term and short-term uptrend lines. Although the down-draft on Wednesday and on Thursday may have felt uncomfortable it did nothing to affect the direction of the market. That said, we note that this market should correct a bit more. The 5-period exponential moving average is 1930.45. The upper edge of the Bollinger Band is 1957.62 and the lower edge is seen at 1862.44. The short-term uptrend line is 1898.15 and the longer-term uptrend line is found at 1889.58. All the indicators that we follow herein continue to point lower. This past week is the first week since May that the stochastic indicator moved out of overbought territory. The RSI has been overbought for almost as long a period of time. Please note that markets can stay overbought or oversold for longer than might have been expect and that is why, these indicators should not be used as signals but rather confirmations of other technical work. This is the first week since May 22, 2014 that the index closed below the 5-period exponential moving average. We are above the Ichimoku Clouds for all time-frames. The daily Market Profile chart (which is a weekly activity chart) tells us that there is no overhead supply above the high printed this past week. The point and figure 1% by 3-box chart continues to look very positive. The 0.1% by 3-box 60 minute point and figure chart has both internal uptrend and downtrend lines, something is going to give on this one.

The NASDAQ 100 closed up in the Friday session. A fresh year’s high was made in the Wednesday session. All of the indicators are pointing lower and are just coming over the overbought levels so, if the market wants to go lower, there is plenty of room to the downside. The NASDAQ 100 was below the 5-period exponential moving average in both the Thursday and Friday sessions. We have not seen this index close below that moving average since May 16, 2014. The 5-period exponential moving average is 3781.80. The top of the Bollinger Band is 3849.12 and the lower edge is seen at 3599.97. The market almost looked as though the traders were short going into Friday and wanted to flatten the positions in front of the weekend. The volume looks as though it fell off a cliff in the Friday session. Even the roll was done on light volume. The 0.2% by 3-box 60 minute point and figure chart continues to look positive. The daily 1% by 3-box chart has an upside target of 4035.29 and not a single downtrend line in sight. We are above the Ichimoku Clouds for all time-frames.

The Russell 2000 closed higher in the Friday session but left a lower high and a lower low on the chart. The horizontal support line was pierced but remains at 1149.00. The channel uptrend lines are 1183.82 and 1130.70. The 5-period exponential moving average is at 1157.14. The top of the Bollinger Band is at 1179.40 and the lower edge is seen at 1086.71. The market has to punch through 1158.20 to slightly annoy the shorts who, for the moment are comfortable. Should the market close above 1159.90 they will become concerned and begin to cover their positions. The real worry for the shorts will occur should the market rally above 1175.60. At that point they will aggressively cover their short positions. On the other hand should the market trade below 1147.20, the door will be opened to 1140 and 1135.

Crude oil rallied in the Friday session leaving what might turn out to be an evening star on the chart. At the moment, it is way too early to say. Crude oil closed above the upper Bollinger Band for the second time this week. We expect it to retreat back inside the band or the band to expand to accommodate the increased volatility. We are above the Ichimoku Clouds for both the daily and the weekly time-frames, but in the clouds for the monthly time-frame. When we look at the monthly chart we see that there is some resistance at 110.87 or so. Above that level, this market could rally to 114.50 and then 121.29. The 5-period exponential moving average is 105.52. The top of the Bollinger Band is 106.28 and the lower edge is found at 101.20. The 60 minute 0.2% by 3-box chart has a downside target of 104.31, however; the chart remains positive. The daily 0.9% by 3-box chart has an upside target of 119.64.

Although gold closed higher in the Friday session and looks as though it is forming a rounding bottom, it remains below the Ichimoku Clouds for all time-frames. The question we have is……gold going to have enough energy to trade back to the congestion area at 1294.7? The 5-period exponential moving average is 1266.70. The top of the Bollinger Band is 1305.05 and the lower edge is seen at 1229.93. The Bollinger Bands are beginning to contract. All the indicators that we follow herein are pointing higher. The daily 1% by 3-box chart has an upside target of 1812.66 and a downside target of 1113.19. The chart looks neither positive nor negative. It looks like the metal is consolidating. The 60 minute 0.2% by 3-box chart looks negative, yet there is an internal uptrend line on that chart. It appears to us that there is a lot of resistance on the upside and every inch that gold gains, is a battle. We do like gold but are not convinced that this is a new leg higher therefore; we will sit this one out and enter the market when we are more secure about the rally.

The US Dollar Index rallied in the Friday session but is printing lower highs and lower lows on the daily chart. The roll had a negative effect and left two down days on the chart. We seem to be forming a triangle, which should be resolved, is a few days. The RSI and the stochastic indicator are bending to the upside but our own indicator has just flashed a sell-signal. The 5-period exponential moving average is 80.74. The top of the Bollinger Band is 81.009 and the lower edge is seen at 80.13. The downtrend line is seen at 80.888. The upward facing channel lines are 80.623 and 81.806. We have a horizontal support line at 80.35. We are below the Ichimoku Clouds for all time-frames.