By Jeanette Schwarz Young on August 3, 2014 in economics 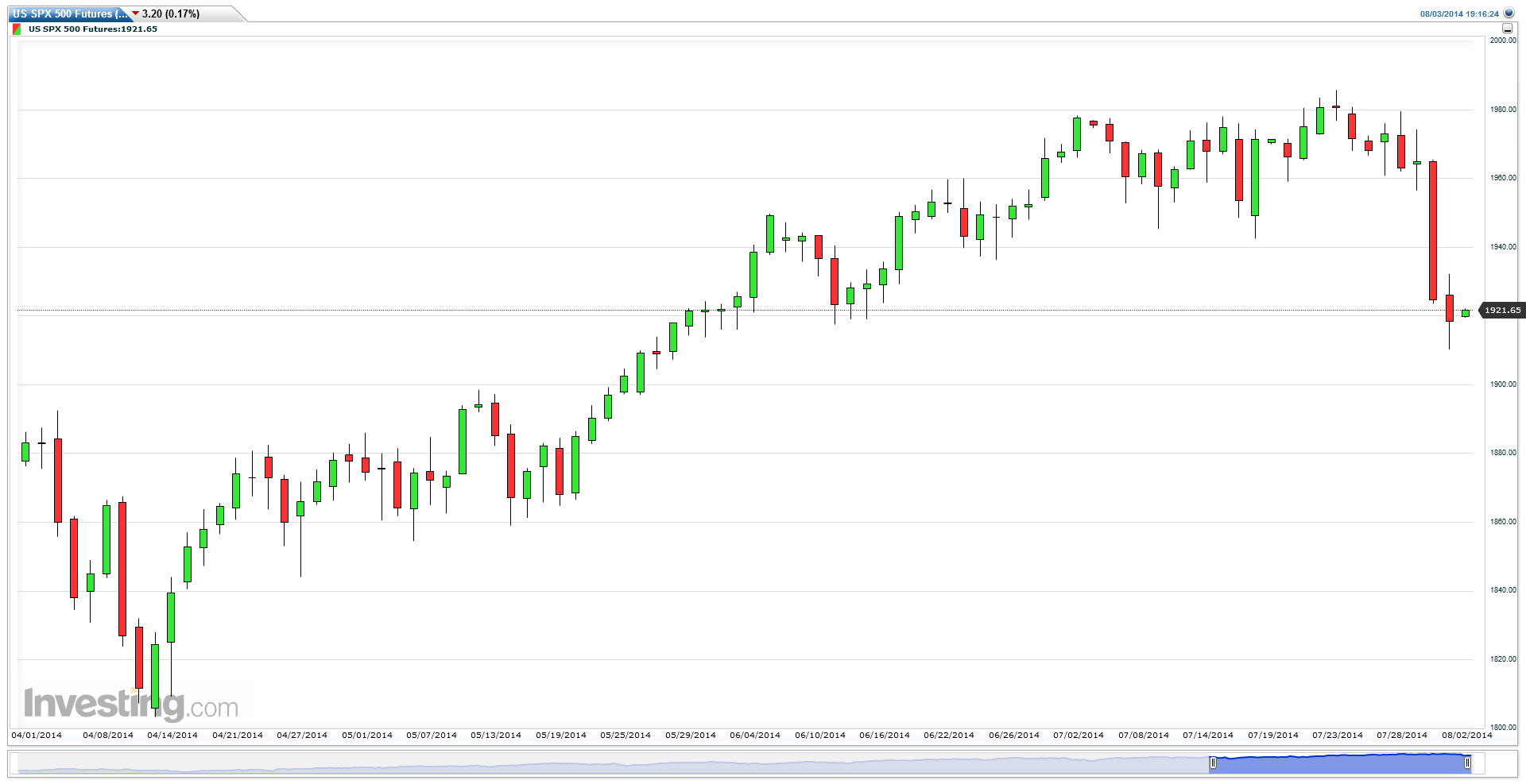 So, what does this economy need? Expansion of sales of discretionary products that will spur on higher wages which will spur on sales. So long as there is an oversupply of the under and un employed that isn’t going to happen. The FOMC should back away from its tinkering with the business cycle and allow those who will fail to flop and those who survive to thrive. This boom bust cycle is nature’s way of cleaning out the trash and leaving a pristine landscape. To date, the FOMC policy has tried to avoid the normal business cycle thus has created bubbles along the way. This isn’t good for the economy and leads to what we have today a very bifurcated population with extremely rich and struggling poor. There is a third group with exists below the surface, those who work for cash and report no income to the government. There will always be those who do that but today, their numbers are growing by leaps and bounds because they have found a way to avoid taxation and possibly accept state and government welfare at the same time. Not a good thing.

The market welcomed August with a decline taking the S&P 500 to within three or so points of a projected low of 1908-1907. We closed below the lower Bollinger Band and, as a matter of fact, only briefly traded above the lower edge of the daily Bollinger Band. The market did lose some of its downside momentum in the Friday session; the 100 day moving average was tested and rejected. We closed below 50 day moving average and ended the Friday session at the 1917 horizontal line. As to the indicators, the stochastic indicator is curling to the upside but has not issued an “all clear” signal nor has our own indicator. The RSI continues to point lower. The 5-period exponential moving average is 1941.81. The top of the Bollinger Band is 1994.87 and the lower edge is seen at 1931.80. To state the obvious: the daily chart looks ugly. Although the indicators continue to issue a sell signal on the weekly chart, the market has stayed above the uptrend line drawn from the October 2013 low. That uptrend line is at 1900.45. The monthly chart shows a market that continues to trade above its uptrend lines. The indicators on the monthly chart are negative with plenty of room to the downside. The shorter of the uptrend lines is at 1886.30, the longer one is 1709.23. We are in the Ichimoku Clouds for the daily time-frame, and remain above the clouds for both the weekly and monthly time-frames. 14.3% of the day’s volume was seen at 1919.12. That said, the price was seen in fewer brackets than other prices but clearly at with higher volume. The daily 1% by 3-box chart continues to look positive. The 60 minute 0.1% by 3-box chart has a downside target of 1869.14 and an upside target of 1957.09 and clearly, 1910.70 is important. The 60 minute chart does not look positive. Within a day or so we will see a bounce in the index. There is a lot of information to be gained by looking at the quality of that bounce as well as its duration. Have the buy-the-dips crowd now become the sell-the rally crowd or is this a short-term cleansing? We see bigger problems on the horizon and have warned that we are entering a seasonally soft time for the markets. We believe that the buy-the-dips crowd is still in control and that they will enter the market once, they believe it is safe to do so. We will use tight stops to protect our positions and if elected will stow the money on the sidelines. We are more sell-the-rally’s flavor of the month.

The NASDAQ 100 retreated in the Friday session but performed marginally better that the S&P 500 performed. This index managed to stay inside the Bollinger Bands and above both the 50 and 100 moving averages. The indicators of this index are not as friendly as they are for the S&P 500. Both the stochastic indicator and the RSI continue to point lower without a bend. The NASDAQ 100 did close above an up trendline drawn from April of 2014. We have a horizontal support line at 3831.50 and another at 3750.25. The 5-period exponential moving average is 3914.45. The top of the Bollinger Band is 3992.75 and the lower edge is seen at 3847.99. The weekly chart shows us that we are above the trend line drawn from October of 2013. All of the indicators on the weekly chart continue to point lower with lots of room to the downside. We are above the up trendline for the monthly time-frame. As to the Ichimoku Clouds, we remain above the clouds for all time-frames. 15.9% of the day’s volume was seen at 3872.34. The daily 1% by 3-box chart shows that the upside target has been achieved. This chart continues to look positive, go figure! Much different story on the 0.1% by 3-box point and figure chart which has a downside target of 3751.41 and looks nasty.

If you like waterfalls, you will love the chart of crude oil. The Friday session took the market to a low of 97.09 before some buyers, likely short-covering, appeared. The candlestick left on the chart is a doji like candlestick. We seem to be losing moment on each downdraft and both our own indicator and the fast stochastic indicator are curling to the upside. The RSI is flat at 28.20. We did close below the lower edge of the Bollinger Band. We are below the 5, 50, 100, and 200 day moving exponential averages. We are below the Ichimoku Clouds for the daily time-frame, above the clouds for the weekly time-frame and in the clouds for the monthly time-frame. The 5-period exponential moving average is 99.08. The top of the Bollinger Band is 104.26 and the lower edge is seen at 97.83. The horizontal support line is 96.84. The monthly chart continues to look like a wedge with rising bottoms and falling tops. This does not resolve for a number of years yet so, it could go one for a while. The 60 minute 0.2% by 3-box point and figure chart has a downside target of 94.58. This market seems to be under continued pressure. The daily 0.8% by 3-box point and figure chart has a downside target of 84.68 and continues to look as though it could trade lower. 20.5% of the volume was for the Friday session was seen at 97.35. Not a pretty sight but there will be a bounce and we expect to see that within a day or so.

Gold traded higher in the Friday session and defended the recent low set in the Thursday session. All the indicators that we follow herein have just issued a buy-signal. The 5-period exponential moving average is 1295.65. The top of the Bollinger Band is 1340.34 and the lower edge is seen at 1281.47. The downward trending channel lines are 1305.38 and 1262.39. The 0.9% by 3-box point and figure chart seems to be stabilizing and looks like a consolidating market. The 60 minute 0.2% by 3-box point and figure chart looks negative. The 30 minute Market Profile chart, which is a daily chart, has a very interesting formation. Thursday and Friday are mirror images of each other, Thursday down and Friday up. Both formations are bimodal. There is a horizontal support line at 1279.60 which should support this market.

How is the US Dollar doing you ask? Just pick up a newspaper and without looking at the quoted price you’ll quickly have an answer. Russia, Israel or, chaos in general, spell out bullish action in the Index. As the world burns investors look for safety and that means the good “ole” U S of A. The US Dollar Index closed the Friday session down for the day at 81.09. The index is currently inside the Bollinger Bands, with the upper band at 81.54 and the lower band at 79.79 and volatility, while still expanding, seems to be losing a bit of momentum. The 5-period exponential moving average is 81.28, the 20-period simple moving average is 80.67 and the index is above both. Both indicators that we follow are currently issuing sell signals. On the daily chart, the index lies just above support at 81.30. Should the index break below that 81 flat is the next stop with 80.74 acting as the safety net. Resistance above can be seen at 81.74 followed by 81.96. Looking to the weekly chart, this last week’s action has confirmed the index’s break out of a four year consolidation pattern. Resistance above can be seen at 81.40 and 81.96. In the event of a pullback 80.60 along with the 80.74 level (which happens to coincide with the broken down trendline) should act as firm support. The .05 x 3 30 minute point and figure chart shows the index is clearly in an uptrend, with several internaltrend lines having formed. The index has met its last upside target (81.45) and currently has one remaining activated upside target at 82.70.

The US Dollar loves chaos. As relationships continue to ice over with Russia and mayhem rules the day in Israel, look for this index to maintain its upward trajectory. That said, things will calm down in Israel eventually. These sort of international box office blockbusters always have a limited shelf life once set off. With that in mind, the bullish action seen in the dollar index since 2011 in conjunction with the recent break of a very long dated down trendline can either be taken in one of two ways. Either these international events have added to the noise on the chart (such as in early/mid 2013), or we are looking at inflation rearing its ugly head into our chart, masked by chaos abroad. While it is too early to tell, long story short, after a pull back this index will have some room to ride.

Option Queen Letter
The End Of An Era: Is The US Petrodollar Under Threat?