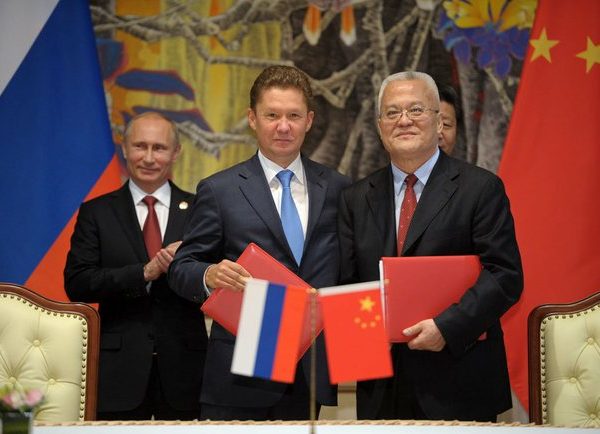 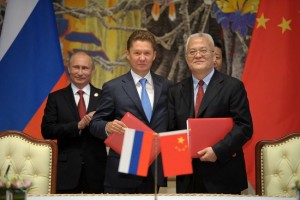 Recent trade deals and high-level cooperation between Russia and China have set off alarm bells in the West as policymakers and oil and gas executives watch the balance of power in global energy markets shift to the East.

The reasons for the cozier relationship between the two giant powers are, of course, rooted in the Ukraine crisis and subsequent Western sanctions against Russia, combined with China’s need to secure long-term energy supplies. However, a consequence of closer economic ties between Russia and China could also mean the beginning of the end of dominance for the U.S. dollar, and that could have a profound impact on energy markets.

Rein of the USD (aka Petrodollar) 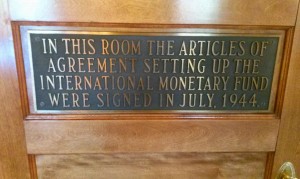 Door to the small room within the Mount Washington Hotel, where the historic agreements were signed establishing the International Monetary Fund and World Bank in 1944.

Before the 20th century, the value of money was tied to gold. Banks that lent money were constrained by the amount of their gold reserves. The Bretton Woods Agreement of 1944 established a system of exchange rates that allowed governments to sell their gold to the U.S. Treasury. But in 1971, U.S. President Richard Nixon took the country off the gold standard, which formally ended the linkage between the world’s major currencies and gold.

Related: Should Europe Be Concerned About Russia’s Growing Energy Relationship with Asia
The U.S. dollar then went through a massive devaluation, and oil played a crucial role in propping it back up. Nixon negotiated a deal with Saudi Arabia whereby in exchange for arms and protection, the Saudis would denominate all future sales of oil in U.S. dollars. Other OPEC members agreed to similar deals, ensuring perpetual global demand for greenbacks. The dominance of the U.S. “petrodollar” continues to this day.

Russia and China Cozy Up

Recent news coming out of Russia, however, suggests that the era of U.S. dollar dominance could be coming to an end, due to increasing competition from the world’s second largest economy and primary consumer of commodities, China.

China and Russia have been furiously signing energy deals that indicate their mutual energy interests. The most obvious is the $456 billion gas deal that Russian state-owned Gazprom signed with China in May, but that was just the biggest in a string of energy agreements going back to 2009. That year, Russian oil giant Rosneft secured a $25 billion oil swap agreement with Beijing, and last year, Rosneft agreed to double oil supplies to China in a deal valued at $270 billion. 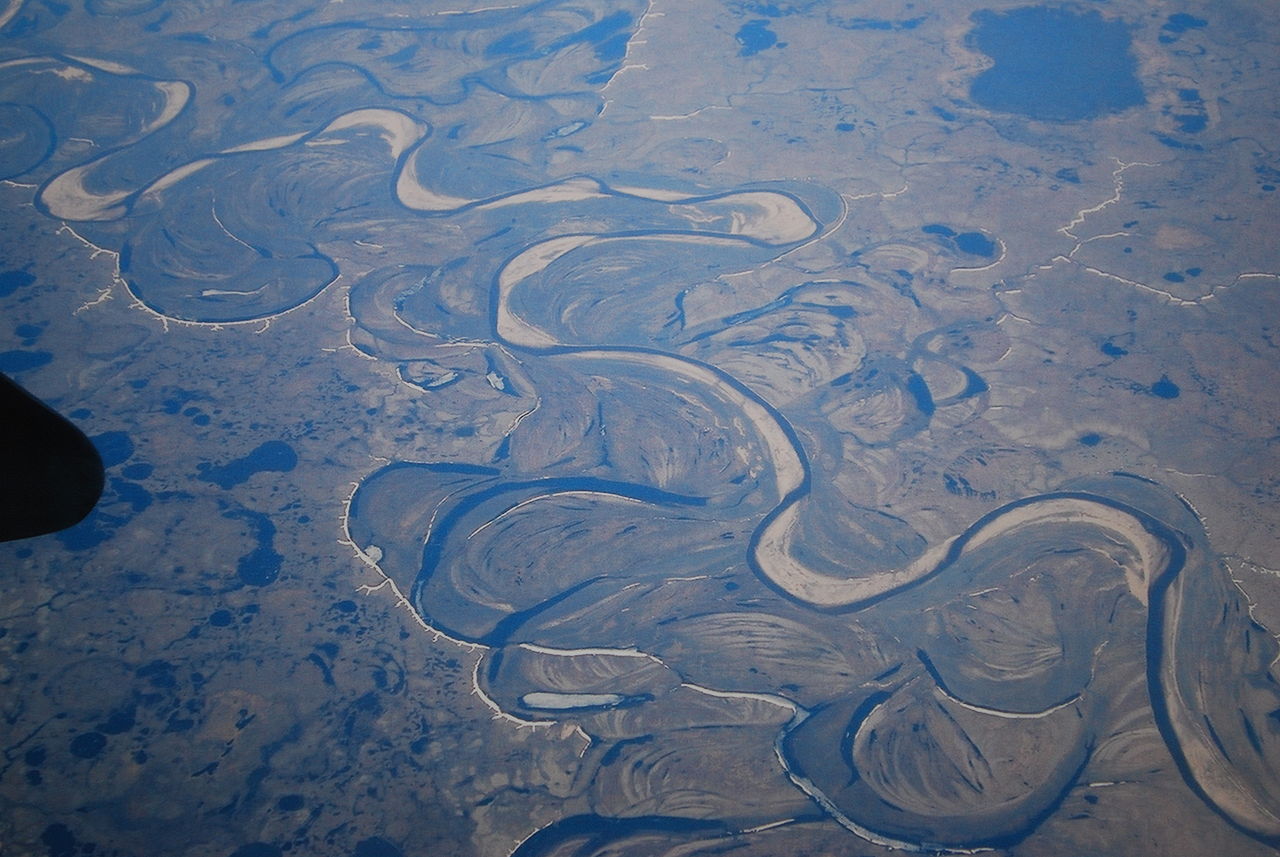 Since Western sanctions against Russia took hold in reaction to the Russian land grab in Crimea and the shooting down of a commercial airliner, Moscow has increasingly looked to its former Cold War rival as a key buyer of Russian crude — its most important export. Liam Halligan, a columnist for the Telegraph, says “the real danger” of closer Russian-Chinese ties is not a bust-up between China and the U.S., which could threaten crucial shipping routes for China-bound coal and LNG, but its impact on the U.S. dollar.

“If Russia’s ‘pivot to Asia’ results in Moscow and Beijing trading oil between them in a currency other than the dollar, that will represent a major change in how the global economy operates and a marked loss of power for the U.S. and its allies,” Halligan wrote in May. “With China now the world’s biggest oil importer and the U.S. increasingly stressing domestic production, the days of dollar-priced energy, and therefore dollar-dominance, look numbered.”

While no one is arguing that could happen anytime soon, considering the dollar remains the currency of choice for central banks, Halligan’s proposition is gathering strength. In June, China agreed with Brazil on a $29 billion currency swap in an effort to promote the Chinese yuan as a reserve currency, and earlier this month, the Chinese and Russian central banks signed an agreement on yuan-ruble swaps to double trade between the two countries. Analysts says the $150 billion deal, one of 38 accords inked in Moscow, is a way for Russia to move away from U.S. dollar-dominated settlements.

“Taken alone, these actions do not mean the end of the dollar as the leading global reserve currency,” Jim Rickards, portfolio manager at West Shore Group and partner at Tangent Capital Partners, told CNBC. “But taken in the context of many other actions around the world including Saudi Arabia’s frustration with U.S. foreign policy toward Iran, and China’s voracious appetite for gold, these actions are meaningful steps away from the dollar.”

Rise of the Yuan

It is no secret that Beijing has been looking to promote the yuan as an alternative reserve currency. Having that status would allow China cheap access to world capital markets and cheaper transaction costs on international trade, not to mention increased clout as an economic power commensurate with its rising proportion of world commerce.

However, the Chinese have a problem in their plans for the yuan. The government has not yet removed capital controls that would allow full convertibility, for fear of unleashing a torrent of speculative flows that could damage the Chinese economy.

However, “[It] is clear that China is laying foundations for wider acceptance of the yuan,” said Karl Schamotta, a senior market strategist at Western Union Business Solutions,” as quoted in an International Business Times article. IBT pointed out that “more than 10,000 financial institutions are doing business in Chinese yuan, up from 900 in June 2011, while the pool of offshore yuan, non-existent three years ago, is now near 900 billion ($143 billion). And the proportion of China’s exports and imports settled in yuan has increased nearly sixfold in three years to nearly 12 percent.”

Adding some vivid color to this story, Casey Research energy analyst Marin Katusa speculated in a recent column that the death of Total CEO Christophe de Margerie, whose private jet collided with a snowplow in Moscow, may not have been an accident. Instead, Katusa muses that the mysterious circumstances surrounding his death and the unlikely odds of being hit by a snowplow at an airport, could have more to do with de Margerie’s business interests in Russia than being at the wrong place at the wrong time.

According to Katusa, de Margerie was “a total liability” due to Total’s involvement in plans to build an LNG plant on the Yamal Peninsula along with partner Novatek. The company was also seeking financing for a gas project in Russia despite Western sanctions.

“It planned to finance its share in the $27-billion Yamal project using euros, yuan, Russian rubles, and any other currency but U.S. dollars,” Katusa writes, then entices the reader with this: “Did this direct threat to the petrodollar make this ‘true friend of Russia’—as Putin called de Margerie – some very powerful and dangerous enemies amongst the power that be, whether in the French government, the EU, or the U.S.?”

That may be a stretch, but Katusa’s U.S. dollar reference shows that any developments that point to a move away from the dominance of the greenback are not going un-noticed.

By Andrew Topf of Oilprice.com

3 Responses to The End Of An Era: Is The US Petrodollar Under Threat?