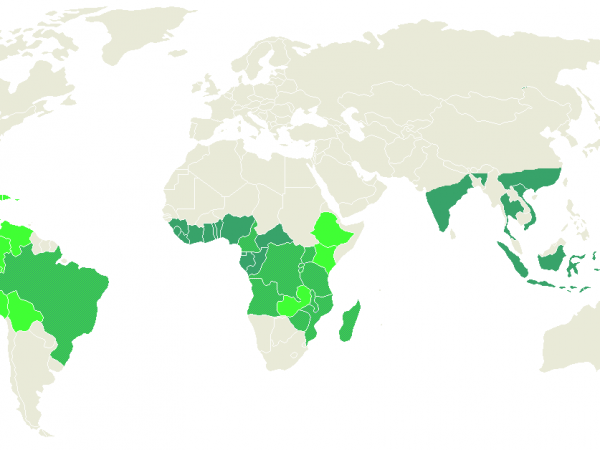 By Rodrigo Costa on October 14, 2015 in agriculture

Weather all over again

One more FED official stated that the interest rate increase until the year end is expected, mentioning also that it is not a commitment and dependable on the global economy – more of the same, make the lift-off still unknown. Many economists believe a 2015 hike is possible, but a good portion is betting on ZIRP to end only at the first half of 2016. Last week equities had the best performance so far this year, being the biggest winners the Asian stock indices. The S&P500 is back above 2000 again with risky assets in on-mode. Emerging markets and their currencies benefited from a friendlier mood, while commodity indices were also rallying until last Friday helped by a weaker greenback and short-covering in several of them. Energy raw-materials had a sharp fall today after OPEC released the production data from its members that in September reached the highest level since 2012, or 31.57m barrels a day. Coffee enjoyed a good rally in both terminals partially helped by the macro environment, but a lot related to the fear of drought and the speculative position being significantly short.

Fundamental data like the Brazilian exports that in September totaled 3,078,667 bags, a strong argument used by bears to defend a well-supplied market, was left aside by bulls that saw a good reversal of the short-term downtrend of, mainly, the arabica contract on ICE. Fund-short covering is taking place in the midst of poor rain forecasts in Brazil that so far have been sparse. Every day that weather institutes see chances of little rains in the so-called Brazilian coffee-belt the coffee community gets anxious that the first wide-spread flowering might not be well fixed. Last year’s drought is fresh on everyone’s mind not to downplay the effect that less than desirable amount of rains could have on the field. Producers seeing an erratic rainfall pattern in the first half of October are also cautious not to jump aggressively on the sell side, although the flow of business have increased and differentials have been offered at softer levels.

Interestingly enough we have not seen much attention being given for the water scarcity in Espírito Santo, which is limiting the irrigation of several farms in the region. As Vietnam is just starting their harvest and many long holders were happy to start fixing some of their coffee on the board last week, terminal prices on the robusta ICE contract could not follow the “C” in the same fashion. Brazilian 16/17 production of conillons potentially should be higher than the current off-cycle, but the weather could have a negative impact, meaning that potentially less coffee could flow from the major origin, either to the international market or the internal consumption, making the S&D of this quality a little tighter.

The basis for robusta Vietnamese grades was reported to be lower with many expecting it to normalize in a couple of weeks. In Indonesia there were reports saying that El Nino could curb the crop from the current record high. So far the market does not seem too worried about it – I guess due to the certs to still be above 3 mln bags. On the arabica side Colombia finished the Oct-Sep export cycle with shipments totaling 12,283 mln bags, 13% more than the year before. On the harvest that is taking place in the country there are some comments about the lower yield, but so far the market wants to wait and see if it improves as the picking and milling increases in volume.

The strength of the Brazilian Real in the past week was offset by the rise of the board helping coffee prices in cts or R$ per pound to stay above R$ 500 cts/lb. Today actually it traded as high as R$ 529 cts/lb, but Brazil was off celebrating a national catholic holiday. The Colombian Peso is now 12.17% stronger from the lows seen on August 26th, making the “C” in cents of pesos per pound 3,955.05, far away from the 4,714.18 that it has “traded” back in mid-August. Options upside protections were bought last Friday moving the implied volatility up 4%, a signal that we are starting a new weather market again, meaning that prices could continue go up if no significant rains start falling in Brazil, as well as once more precipitation is confirmed in the next week or two it shall pressure the futures market lower.