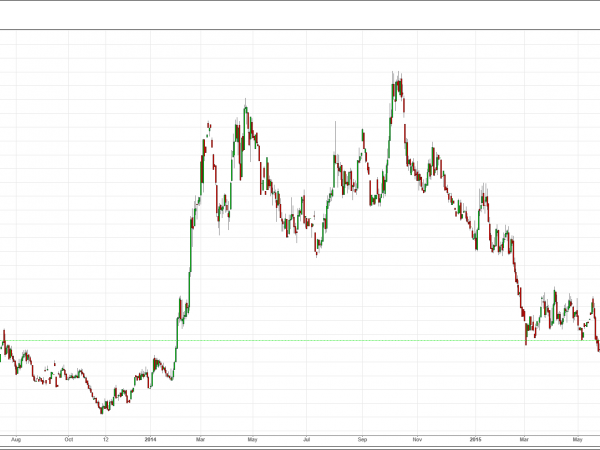 By Rodrigo Costa on October 6, 2015 in agriculture

Have we seen the lows?

Janet Yellen (two weeks ago) tried to calm down the markets saying that she and most of the FOMC expect a liftoff in 2015, but the growth revision of the Chinese GDP and Friday’s US job number have made investors skeptical about a rate hike this year still.

The change on nonfarm payrolls of September not only came below expectations but the revised figures from August “trimmed” 37k posts, reinforcing the idea that the FED has lost the window it had to leave the ZIRP (zero interest rate policy). Risky assets turned into a moderate “on mode” pulling equities prices up between 3.50% and 6% only in the last five days for the major European and American indices.

Commodities enjoyed a recovered mostly in the previous two sessions, including today, led by the 24.79% gains of Raw Sugar ad 8.78% of Arabica Coffee in one week. Funds being short several raw materials still leave room for commodities to move higher, especially if the greenback does not resume the uptrend it was riding until recently.

Coffee terminals benefitted partially on a less hostile macro environment but even more on the fund short-position and the recovery of currencies of the major producing countries. On top of it the strength of the basis across the board and even more for higher quality beans contributed to force a relatively small short-covering of non-commercials while commercials have shown less selling appetite that one would imagine given the recent price appreciation.

The most beautiful flowers that many (if not all) traders and farmers have seen in Brazil along with the Brazilian Real that traded at R$ 4.2478 in a steep and quick spike a little more than a week ago were not enough to drive future prices much lower, signaling that coffee will not leave the hands of the origins as easy as thought. Plentiful rains in September on the Brazil coffee belt have not had a desirable sequence yet, posing a risk for the mother of all crops to be as large as some are looking at. During last week’s Swiss Coffee Dinner, a superb event that is extremely well organized and attended by an increasing number of participants, the theme that dominated the chats and presentations was the crop potential in Brazil. Surprisingly only one of the major players sees a potential of a crop larger than 60 million bags, with several hovering around 60 million and key ones seeing a production that will not surpass 58 mln bags.

On my presentation given to some that had interest, which is somehow similar to the one I had given in Brazil for the BM&F Seminar in May, I mentioned that a 60 mln bags should not be read as negative for prices as it would not be enough to offset two years of deficits that ate at least 5.5 mln bags of World inventories. On top of it those who were seeing demand being dented have revised their balance-sheets keeping the growth pace between 1.5% and 1.9%, which means that the surplus in 16/17 might not even reach 5 mln bags, assuming that Brazil’s output will be 60 mln bags. It is important to notice that for the potential to be achieved a regular weather pattern of rains and temperature is needed, and as one influent researcher had shared with me, pruning would also have to diminish from the current average.

Of course Brazil is not the only player in the field, but on this matter there are also some limitations of production from Vietnam and Colombia. The first because the prices of black-pepper and the diversification of local farmers into this culture not only might limit the amount of coffee that will be offer in the international market, but even more important it will limit the high production growth pace that Vietnam was having until a couple of years ago. Aging trees, an already high yield, well financed growers and a currency that has not devalued to make up for the losses of the ICE Robusta prices will make differentials for this origin to remain firm and the flow of coffee not to catch up with the buying needs that trades and roasters have for this type of coffee. Yes the certs are at high levels and at this point it is compounded by conies that have not, yet, attracted many European users, but if the purpose of having the certs is related more to the structure it will be unlikely that they will have a very negative effect on the terminal (even more if interest rates seem unlikely to change in the near future). At one point buying conies at a 150 usd / ton lower levels than robustas could make some roasters attracted to these beans (private-label only?).

In Colombian case the erratic rains have come up on conversations about the impact for the crop that is being harvested and the potential for the country to further increase the output. Another interest fact is that pricey differentials of naturals have brought interest to the ICE certs that are now at 1.99 mln bags, or the lowest level since September 2012, even though Brazilian exports have not slowed yet. To wrap up the bullish sentiment we can also mention that funds have not covered a significant amount of their shorts and the Brazilian Real seem to have passed through the worst as Dilma has given away her government to the major party that supports her and had also brought back Lula to take care of her second term, unofficially of course. The negative points remain the contango market and the commercial long position that is very high, but the first is nothing new to coffee traders and the later certainly see a risk-reward towards keep the coverage at least at the same levels, even more in face of a basis that is not attractive as they would wish.

After filling the gaps left on September 25th, both arabica and robusta markets have moved sideways respecting the previous lows and breaking up today. December15 contract on ICE was able to hold the 20day moving average ever since, finally moving above the 40day moving average and closing at the best level since mid-August. Apparently funds have not liquidated a significant portion of their shorts yet, given the volume and the change of the Open Interest, therefore the key 100day moving average at 130.00, where there is also a resistance line that comes from the highs of November 2014 and August 2015, could accelerate a rally that would then test 133.20 and 142.60. Support lines are at 124.30, 120.40 and 119.20. November15 on ICE has the first resistance at today’s high, 1609, then 1680 and 1700, while support levels are at 1567, 1544 and 1529.

Timing the Low in Gold
Sugar Pops; Could Be Early Clue Raw Commodity Sector is Bottoming