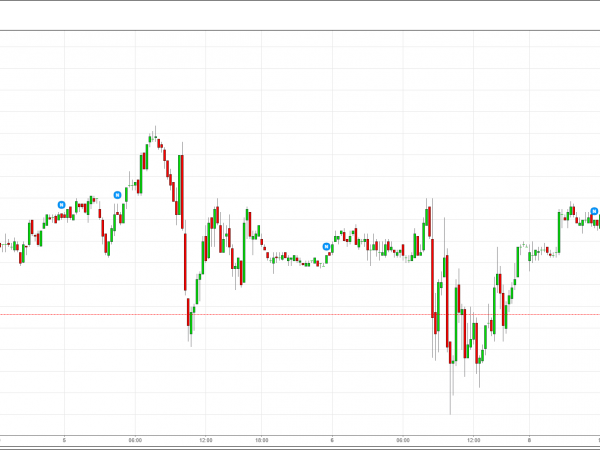 By Jeanette Schwarz Young on November 9, 2015 in traders

Here in the northeast, the weather has been fantastic. We have been enjoying our Indian summer and, as the major indices continue to rally in the fourth-quarter, so too have the markets. We did; however, see a minor retreat on the very positive “Jobs Report” in the Friday session. The reports highlights the expansion of low paying job. Will it translate into consumer spending for the all-important Christmas Season? We certainly don’t know. We do know that the US Dollar surged in the Friday session and that folks will continue to make our exports less competitive.

Why did the US Dollar surge? It is simple, because the positive “Jobs Report” signaled to the FOMC that the economy is enjoying an expansion and thus a rate hike can be justified. Will they do it in December? Who knows, but we tend to doubt it. It is more likely that if they hike, it will be in January. What does a rate hike do to the currency? It makes it stronger. Money floods into the US looking for the more appealing interest rates and demand increases for the US Dollars needed to purchase those fixed-income instruments. Remember a time not too terribly long ago, when Switzerland was faced with a very strong currency. What did it do? The Swiss pegged their currency to the Euro thus (doing a Houdini currency adjustment) keeping their currency in check, preventing further appreciation. The Swiss did not need do anything more: the currency retreated… well somewhat… Sadly for the FOMC, this isn’t a model that is adaptable to the US and thus we will continue to lose exports and have greater difficulty in the global markets. Manufacturing in the US will continue to retreat and we will attempt to continue the expansion of our service industries. The bottom line is, this is good for our competition and bad for our companies.

Will the currency wars resume with each country bashing their own currency in an effort to maintain their price advantages? Food for thought… Speaking of food, this sort of behavior reminds us of the food fight scene in “Animal House.” The incident started off fairly low key. Bluto, using a puff pastry in his mouth, mimics an exploding zit. The scene grows quickly into a hilarious real food fight… ah those college days we truly miss them. How does this relate to counties pressuring their currency lower to stimulate sales and production? One country sees what the other is doing and before you know it, there is currency devaluation all over the lot… a currency food-fight in progress… (we believe this is the technical term), resulting in instability in currencies and, the return of gold. The US multinationals will feel the continued pain of a strong currency. This translates into difficulty remaining competitive regarding exports. Our US Dollar simply makes our products too expensive, opening the door to poor sales and a flood of cheap imports just in time for the Christmas Season.

On another note, are we approaching the end to stock buy-backs? Well, probably yes, as interest rates ratchet higher money becomes more expensive and thus it becomes costly for companies to borrow in the market and buy-back their shares. Another fudge factor bites the dust! Oh and you wonder why income earned made a nice advance? Try remembering that the minimum wage was recently jacked up….tada!

In a recent article in “Barron’s” Ben Levisohn expanded on the subject of earnings…. noting just what we have been saying for years. You can massage them anyway you want them to turn out. We continue to believe in technical analysis, you see why? Supply and demand trumps all!

The Friday “Jobs Report” at first blush was very positive. The market initially took this as a shot across its bow and retreated. By the end of the session the S&P 500 regained all of the loss added a couple of points then closed the session with a shallow decline of 0.50. We see a possible bull flag on the chart along with two doji-like candlestick from the Thursday and Friday trading sessions. The “W” pattern is almost completed and is close enough for us not to wait for the last few points. Market Profile shows us that the most frequently traded price was 2093. The high volume area was at 2086. Both the stochastic indicator and our own indicator are issuing a sell-signal the RSI remains flat very near to overbought levels. The daily 1% by 3-box point and figure chart remains positive. The 60 minute 0.2% by 3-box point and figure chart is also positive at the moment. We are in the seasonally favorable time of the year and continue to expect to see the markets push a bit higher. Remember if the FOMC does raise interest rates, they are broadcasting to the public that they believe that the economy is expanding enough to be able to absorb the rate increase without hampering the expansion…..we shall see. We have our doubts about that one.

The chart of the NASDAQ 100 looks much like that of the S&P 500 only that this index actually achieved the upside number projected by the “W” formant. We continue in an uptrend and show that the slight retreat from the recent high was very modest. Actually the Friday change was up for the day. Both the stochastic indicator and the RSI continue to issue-a buy signal albeit at extremely overbought levels. Our own indicator has issued a sell-signal. The 1% by 3-box daily point and figure chart continues to look strong. The 60 minute 0.2% by 3-box chart has a high target of 4941.86 and a downside target of 4617.30. This chart looks less positive than does the daily chart. The high volume area was seen at 4696 and the most frequently traded price at 4698. Most of the day’s action was seen to the downside.

The Russell 2000 finally awoke from its slumber and bolted to the upside adding 11.50 handles, points to the index in the Friday session and closing very close to the highs of the day. The high volume area, 1185.25was seen in the early brakes of the session. The most frequently traded price was 1186. Both the stochastic indicator and the RSI continue to point high although they are both very overbought. Our own indicator is issuing a sell-signal. It is thought that many of the stocks in this index do not depend on exports as much as the large capitalization stocks do and therefore, a strong US Dollar will not be a detrimental to their earnings as it will to other large multinationals. Remember in a good rally these stocks will outperform to the upside but also never forget, that they outperform to the downside in a retreat.

As the US Dollar rallies, crude oil retreats unless there is unusual demand for the product which, is not the case today. The price of crude oil retreated 68 cents in the Friday session capping off a rather lousy week for the crude oil bulls. Four of the past five trading sessions have been to the downside. We have not broken out of the trading range we established at the end of August. The last three days were ugly. The top of the range is 50.92 and the bottom of the range is 42.58. The downward trending channel lines are 48.01 and 41.47. All the indicators that we follow herein continue to point to the downside with plenty of room to go. The only good we can see in the daily chart is that the Bollinger Bands seems to be beginning to contract. The 1% daily 3-box point and figure chart seems to be contracting. We have both an upside and downside old target but nothing new to report. The 60 minute 0.7% by 3-box point and figure chart shows consolidation also. Keep your wallet on your hip until the market tells us where it is going to go from here.

If you thought crude oil was an ugly chart, just take a gander at gold…..yuck! We not only had the US Dollar blowing to the upside but we had chatter out of India’s leadership speculating on releasing some of the treasury’s hoard of gold. This market looks awful. The door is now open to 1072.30. Yes, this is an oversold market and yes, we have buy-signals coming from the stochastic indicator and our own indicator but the RSI continues to point lower at oversold levels. The 60 minute 0.25% point and figure chart looks terrible. The daily 0.9% by 3-box point and figure chart is less awful but certainly nowhere near fair or good. The good news here is that platinum did not decline as much as gold did and actually the prices are becoming close so maybe there is some expansion in the economy. Time will tell.

The US Dollar index broke to the upside in the Friday session taking on 1.23 handles on the day. The Market Profile chart o