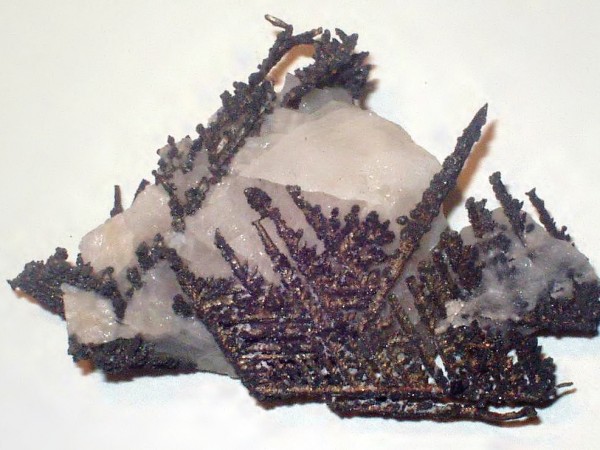 According to the recently released Silver Institute 2015 Interim Report, the world experienced annual silver net deficits for 12 years running. This is surprising as the Silver Institute actually reported a small net surplus of silver in 2014. However, the small silver surplus turned into a deficit when 2014 mine supply and total demand figures were revised.

If we look at the chart below (using last year’s data), annual silver deficits were reported until 2013 and then turned into a surplus in 2014: 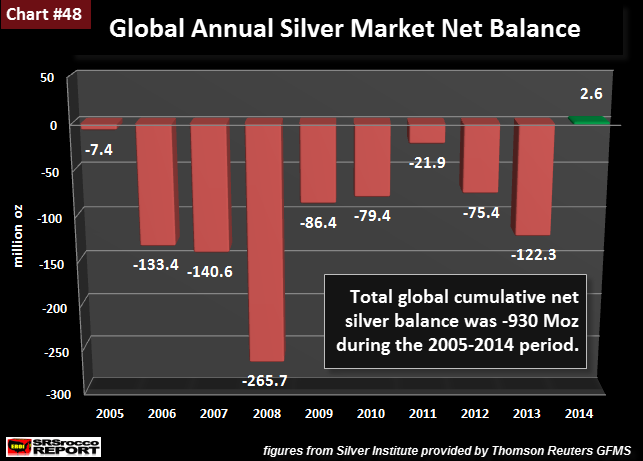 This was Chart #48 from THE SILVER CHART REPORT, released earlier this year. Going by this data, the world suffered a cumulative net deficit of 930 million oz (Moz) for the past decade (2005-2014). The annual net balance figure is calculated using data from Thomson Reuters GFMS provided for the Silver Institute.

The annual net balance figure is comprised by first subtracting total physical demand from total supply. This is their “Physical Surplus or Deficit figure.” They then take this physical surplus or deficit figure and add or subtract net changes in Silver ETFs and Exchange Inventories. The end result is a “Net Balance.” Basically, the annual net silver balance also takes into account the build or decline of Silver ETFs and Exchange inventories.

Even though Thomson Reuters GFMS reported a small silver surplus in 2014, I knew it was going to be revised lower to a deficit. Why? Because my analysis showed that they overestimated mine supply and underestimated physical investment demand.

If we take the data from the Silver Institute’s 2015 Interim Report and 2014 World Silver Survey, the world experienced consecutive silver deficits for the past 12 years: 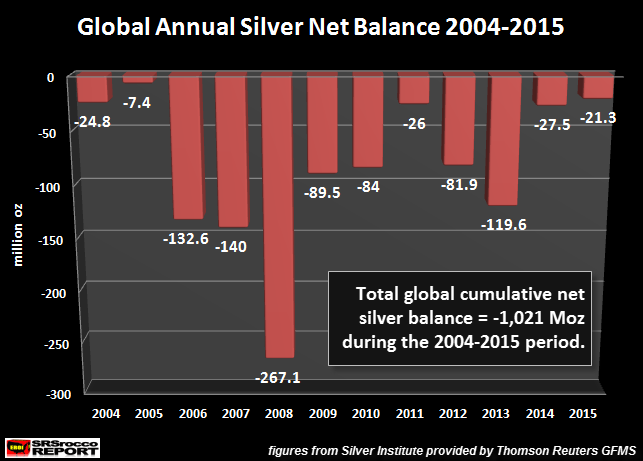 NOTE: The 2015 figure should read 2015 Est. (estimated). Actually, I believe the 2015 net deficit of 21.3 Moz will be even higher when they revise the data next year. I will get into more detail on this in following articles, but I believe estimated 2015 Silver Bar & Coin demand was under reported by a large percentage.

That being said, the 2014 small net surplus of 2.6 Moz turned into a deficit of 21.3 Moz due to global silver mine supply being revised lower by 12 Moz to 865 Moz from 877 Moz reported last year, while total Silver Bar & Coin demand was revised higher to 203.5 Moz versus 196 Moz stated last year. These two revisions accounted for the majority of the net -23.9 Moz change.

Adding up all the annual deficits from the period 2004-2015, the world suffered a cumulative shortfall of more than a billion ounces of silver… 1,021 Moz to be exact. That’s a lot of silver. So, where did it all come from and does it really matter?

When Do The Silver Fundamentals Matter?

Here is an excerpt from the Silver Institute 2015 Interim Report on the subject of physical deficits:

The silver market is expected to be in an annual physical deficit of 42.7 Moz in 2015, marking the third consecutive year the market has realized an annual physical shortfall.While such deficits do not necessarily influence prices in the near term, multiple years of annual deficits can begin to apply upward pressure to prices in subsequent periods. This year, however, net outflows from ETF holdings and derivatives exchange inventories on a year-to-date basis have lessened the impact of the physical deficit, bringing the net balance to ‑21.3 Moz.

Remember, the estimated physical silver deficit of 42.7 Moz in 2015 does not factor in the net change of Silver ETFs and Exchange Inventories… which was a net decline of 21.4 Moz (as of Sept 2015).

Regardless, the important item to focus on in the quote above is the statement, “multiple years of annual deficits can begin to apply upward pressure to prices in subsequent periods.” What is interesting here (not discussed in the Interim Report) is that net silver deficits have been now going on for 12 consecutive years when we also include builds in Silver ETFs and Exchange Inventories.

So, where did all this silver come from to supply a 1+ billion oz shortfall over the past 12 years? That is the trillion dollar question. I believe this billion oz shortfall was supplemented from a source known as “Unreported Above-ground Stocks.” While this figure is nothing more than a good guess by various official sources, it has fallen precipitously since the 1990’s.

The CPM Group stated that “Implied Unreported Silver Stocks” reached a peak of 2.2 billion oz (approximate figure) in 1990 and fell to less than 200 Moz in 2014. This draw-down of unreported above-ground stocks supplemented both the annual physical supply deficits and builds in Global Silver ETFs over the past 35 years.

While it’s impossible to know how much remaining silver (from unreported above-ground stocks) can be used to supplement ongoing annual deficits going forward, there’s probably a lot less than we realize. Furthermore, the segment of the silver investment market that was impacted the most during the rapid 60% fall in the silver price was Global Silver ETFs.

Even though precious metal sentiment is now probably at all time lows, investors need to realize NOTHING HAS BEEN FIXED in the Global Financial Markets. Yes, it’s true that the propping up of the markets by the Fed and Central Banks has gone on longer than we realized, the unraveling of the World’s Greatest Financial Ponzi Scheme is still on its way.