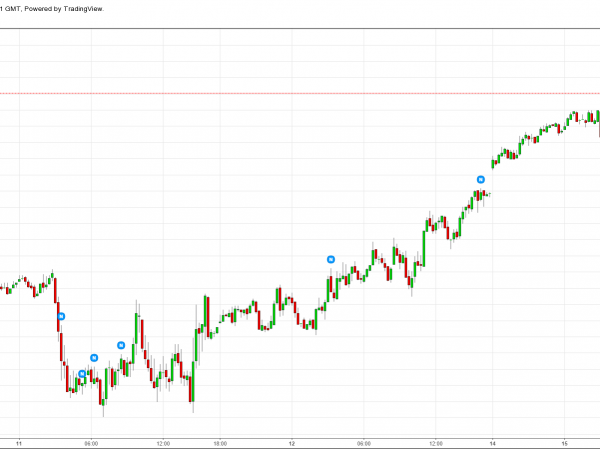 By Jeanette Schwarz Young on February 15, 2016 in traders

Happy Valentine’s Day! Today’s headline “Trump, Sanders are they killing the market?” Seriously… on the front page of Barron’s magazine? Let’s get real people… No, they are not killing the markets. What we are witnessing right now are the effects of intermarket relationships at play. A strong US Dollar is a great thing during a time of extreme inflation but, during a weak economy it can be rather dangerous. A combination of inflated prices for products produced at home together with suppressed wage growth creates demand for cheaper imported products while placing a recovery in jeopardy by creating deflation pressures (by the way that is why a strong US Dollar is important to combat inflation).

In short, today’s strong US dollar hurts US exporters and US producers that are competing with cheaper imports. Further, cheap oil has virtually shut down US production of oil and has hurt the Canadian economy as well. The transportation index blossomed with petroleum transports but when cheap oil impacted the oil fields and rig shut-downs began, the transportation index retreated. Why, because the prior increase in traffic was attributable to the rail transportation of petroleum and related products. In many ways, Trump and Sanders are a byproduct of this environment rather than the cause. Trump and Sanders represent many things. They reflect a growth in populist movements on both sides of the isle, perhaps signaling that a shrinking middle class has finally had enough. Perhaps, more than anything, they are the products of social media and constant buzz word news. In a day when single words rule the headlines and news is old seconds after it has been released, these two marketers have been able to reach the masses in a way like never before, gaining fuel through the masses, something feared by many of our founding fathers. Most of all, these candidates are a sign that Americans are sick and tired of a do-nothing government that is run by people constantly seeking re-elections, pandering to those receiving entitlements…including themselves.

Our economy cannot continue on its current path and that is what the market is broadcasting loud and clear. Although this country is in awful financial condition, we are the best of the worst and until another country emerges as better, you had better keep you bucks here!

As to negative interest rates; not a bad idea if and only if, it relates to bank deposits at the Fed. Why do we say that? Because that gimmick would force banks to lend money rather than to keep it on deposit. The next question is; are banks going to take more risk on their loans? Our opinion is that we doubt it.

The S&P 500 rallied 35.50 handles (points) in the Friday session. The question regarding this relief rally is was it mere short-covering in front of a three-day weekend or was there something more to that rally? We remain in a down trend. The down trending channel lines are 1884.25 and 1796.9722. The horizontal support line at 1804.25 did hold and the market which touched that level, in the Thursday session, and rejected it as though it was a high tension wire. The Thursday session had higher volume than did the Friday session. The next horizontal resistance line is 1864.50. The Bollinger Bands have stopped contracting, but have not begun expanding as yet. The indicators that we follow herein are sending us mixed signals with both the RSI and stochastic indicator pointing higher and our own indicator is just going sideways with a sell-signal inforce. The most frequently traded price, in the Friday session, was 1842. The highest volume was seen at 1852. The daily 1% by 3-box point and figure chart has a new downside target of 1530.57. The 60 minute 0.2% by 3-box point and figure chart has both a new downside target of 1696.91 and a newer upside target of 1863.99 which is near the level achieved in the Friday session. We are not out of the woods and are still in a downtrend. We maintained the trading range from 1804 to 1940 and until the market deviates from that, we will suggest that range trading with trailing stops, might be a trading idea. The first clue is a break above, on a closing basis, of 1879 which is the downtrend line for the Monday session.

The NASDAQ 100 gained 54 handles (points) in the Friday session closing above the recently violated horizontal line. We continue below the medium-term downtrend line and will likely find resistance at 4106. This index did not perform as well as did the S&P 500. There is a downtrend line at 4148.74 and the downtrend line beneath the lows is 3854. 67. All the indicator that we follow herein have now issued a buy-signal. The volume in the Friday session was not as heavy as was seen in the turn-around Thursday session. The candlestick left in the Thursday session was a doji, which indicated that a reversal was possible. The Market Profile chart left a bimodal curve for the Friday session. The most frequently traded price was 3994.25 but the highest volume was seen at 4004. The daily 1% by 3-box point and figure chart has a downside target of 3196.2. The 60 minute 0.2% by 3-box point and figure chart has an upside target of 4103.86. We remain cautious on this index.

The Russell 2000 rallied 17.30 handles (points) in the Friday session but remains below the downtrend line. The Bollinger Bands are expanding and all of the indicators that we follow herein are pointing higher with plenty of room to the upside. The down trending channel lines are 990.08 and 932.98. The most frequently traded price was 968 and the highest volume was seen at 969 where 16% of the day’s volume traded. Looking at the monthly chart clearly shows the damage that was done to this index. The Russell 2000 seems to have been following the US Dollar Index as the charts look very similar on the downside. Caution is warranted on trading this high volatility index. We like it because we do get trades but the action in this index seems to lurch forward and waterfall downward….be careful.

The US Dollar index actually gained in the Friday session. All of the indicator that we follow herein are pointing higher from near oversold levels. We continue in a downtrend. The Bollinger Bands are extremely wide and could begin to contract. If you used the 5-period exponential moving average as a guide in your trading, you would have been a happy trader until the Friday session. It seems likely that this index will continue to bounce a bit higher. The most frequently traded price was 95.70 and the highest volume was seen at 96.07 where 9% of the day’s volume was seen. The Market Profile chart shows a bimodal curve for the trading day. The daily 0.5% by 3-box point and figure chart clearly shows that this index is below the downtrend line. The 60 minute 0.2% by 3-box point and figure chart has a downside target of 90.5132. This, of course would bode well for the US economy and its multinationals who have been extremely hurt by the strong US Dollar. The market should acknowledge this and rally in the face of a weaker US Dollar, that is, if they believe that this is more than a short-term trend.

Crude oil remains in a down trend even with the 2.81 rally seen in the Friday session. The down trend line is at 32.499. The Bollinger Bands appear to be expanding ever so slightly. Both the stochastic indicator and the RSI have issued a buy-signal. Our own indicator will issue a buy-signal in the next session so long as the rally remains. As noted in the past, we see a stair-step decline in crude. Can this change, yes, but it will take more than a day or three of rally to convince a short to cover their positions. The most frequently traded price was 27.25, most of which occurred in the overnight session. The highest volume was seen at 29.15. Was the rally caused by the weakness in the US Dollar index or the chatter amongst OPEC members about curtailing their production. We believe that the weakness in the US Dollar was the factor attributable to this behavior. The 60 minute 0.9% by 3-box point and figure chart has a downside target of 22.2. We do have an internal uptrend line but an awful lot of overhead supply to worry about. The daily 1.5% by 3-box point and figure chart has a downside target of 24.56 and continues to look awful. Stay nimble and cautious on this market.

Gold retreated 8.8 in the Friday session as some profits were taken off the table. Both the stochastic indicator and the RSI have issued a sell-signal. Our own indicator has issued a buy-signal this is a clear divergence which should put you are guard and have you study this chart a little more carefully. The price has bounded above the upper Bollinger Band which tells us that either the overextended Bollinger Band extends more or the price will retreat back inside the band. The gold vs. platinum spread has blown out to the upside. Gold is out performing platinum. The 60 minute 0.25% by 3-box point and figure chart has achieved its upside target and looks very positive. The daily 1% by 3-box point and figure chart looks positive but remains below the downtrend line. Although gold has performed well, remember that it is a gauge of fear and of currency instability. Tread carefully and keep your trailing stops in place.

Risk
Trading futures, options on futures and retail off-exchange foreign currency transactions involves substantial risk of loss and is not suitable for all investors.
Past performance is not necessarily indicative of future results.
Copywrite 2016 The Option Royals – Option Queen Valentine edition