By Edgard Cabanillas on February 24, 2016 in traders

It has become more evident over the past few weeks that we have finally turned a corner on the currency markets. 2015 was dominated by a very strong USD, which all of us getting paid in USD, were delighted for its advantage while travelling overseas. Now, that the USD looks as if it is taking a turn for the worse, I see that some key commodities markets like the grain complex will have a significant BULLISH effect over the course of 2016. Given the nature of grain-livestock market inverse relationship, we would expect that at least for the short-term that Live Cattle and Lean Hogs will be under pressure during this grain market rally for Q1 and Q2 2016.

This week the USDA issued their baseline projections (Supply & Demand estimates through 2025). Before we look at these projections in deeper detail, we should first take a look at historical data and how Supply & Demand general analysis should be viewed. In 2000/01 crop year, overall global demand for wheat, corn and soybeans was 585.73 mln mt, 604.84 mln mt and 171.86 mln mt respectively. For the 2015/16 crop year, the USDA (as per February’s report) is forecasting 711.41 mln mt, 967.45 mln mt, and 314.52 mln mt, respectively. Demand has increased because of the obvious population growth but in general it has, in the past few years, not outpaced supply. That is why it is important to look at Stocks to Use Ratio relative to Price in order to gauge our long-term projections for prices. The Higher the S/U ratio the lower the price we expect and vice versa.

If we look at the last 16 crop years’ worth of data (source: WASDE): 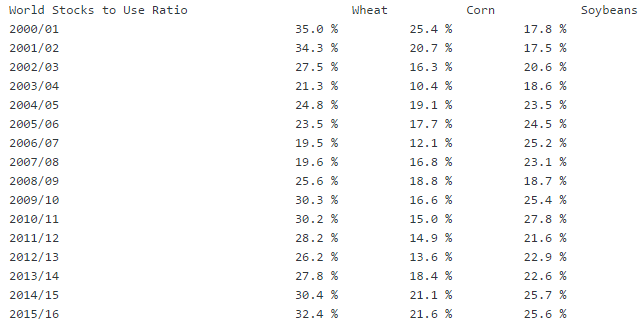 Keep in mind, the S/U ratios fluctuate from month to month depending on price fluctuations, so the above numbers are the finalized ones posted for the crop year.

As stands to reason, the low prices for corn, wheat and soybeans are due to high S/U ratios for the world scenarios. I prefer to look at the world numbers (vs. U.S. only) because South America and Black Sea suppliers in general have become a more important player in the world markets just in the past 5 years.

So where do we go from here? Now that we have historical numbers, we can look more specifically at each individual commodity for analysis.

The wheat market this week made a slight advance in the outright futures. It still seems to continue to be a struggle to get any legs under it at this point but I continue to believe, with the consistent export sales we are seeing reported every week and with expectations for fewer acres given the current price structure (from baseline estimates), that the wheat market has very limited downside still as pressure to supply are starting to show their ugly head given economic strains to the main exporter countries like Black Sea, EU and North America. I would not be surprised that planted acreage this spring becomes a bigger issue unless we rally the wheat market more significantly. My ultimate target is for wheat to travel to $ 6.50 per bushel.

USDA baseline acreage report and long-term S&D projections were released this week. Wheat acres seem to be shrinking long term given current price structure domestic use (although stale) and exports increase and ending stocks are down to 667 mln bushels projected for 2025/26 vs. 928 mln bu estimated for 2016/17. It makes it very difficult to make an argument that lower prices are in store if demand stays steady or increasing, USD projections are negative and wheat acreage is shrinking.

Furthermore, if we look at the above WASDE numbers (S/U ratio), one might think that wheat is a downtrend because the current S/U at 32.4 % compares to nearly the same numbers as 2000/01 and 2001/02. Well, there is a reason, in my opinion, that we are not heading down. The first reason is that the ethanol industry exists due strong government blending mandate and currently supports/ subsidizes the corn markets, so it has an intrinsic value, below which it will not go. If corn does not go below this intrinsic value, $ 3.25 per bushel, then wheat, which has a higher intrinsic value to corn, cannot go below this value. The second reason is that although there is quantity of wheat out in the market, the futures values in the U.S. price only milling quality wheat and NOT feed quality wheat. Argentina has a large crop but with a lot of low quality. Russia and France also large quantities of feed wheat or off-grade wheat that the milling industry WILL not use. The evidence of this are the recent controversies with Egypt that has rejected French cargoes from a major 1st class supplier. Quality milling wheat is becoming an issue.

Given current market conditions, I prefer to stay on the long side of the market via the Chicago spreads for 3 reasons

Although the corn market was not very dynamic at the end of the week, we are starting to see some very interesting dynamics in the spreads. Not only are we seeing increasing line-ups and supply concerns in South America but also strong sales in the U.S. Now, we even got a supportive USDA baseline report showing the potential for shrinking long-term acreage in the corn market while demand continues to climb steadily. Spring planting weather is obviously going to be very important to set the tone for the summer weather market, with or without La Nina present. However, overall, I see (I know I sounds like a broken record) that corn has very limited downside and this week’s spread activity finally that to me. $ 4.50 to $ 5.00 is my next target to the upside.

Even with incremental yield through 2025, USDA still not showing carryouts (or ending stocks) higher than 1.760 bln bushels (for 2016/17) down to 1.740 bln bushels for 2025/26. So hard to increase acres with current prices even with higher yields, demand continues to outstrip supply as exports and domestic demand (with stale ethanol demand) continues to grow.

As we look more closely to historical world S/U’s, we see that 21.6 % currently projected is high relative to bull years. 2006/07 and 2012/13 is when we had $ 8.00 bull years. I don’t think we are anywhere close to that happening this year unless La Nina really puts a ringer into the weather market this summer. I think given the fact that Ukraine and South America are both either the same price or higher than U.S. corn, at a time when U.S. should be concentrating on planting and NOT marketing their crop, I think it will take the market off guard and make corn futures rally.

As for the play on the corn market, I think that the safest best is to be long CN/Z in anticipation for some mild version of bull market. Full carry (storage only) is 25 cents so if we are pricing CN/Z right now with bullish ingredients at 12 to 13 cent carry, I think it makes sense to take the risk on the long side of spreads.

Going into March, I think that we are going to see some very dynamic moves in the oilseed complex. We have already seen a fairly stout rally in the soybean oil market. Although crush is holding steady on the board here, we are hearing that Chinese crush is rallying quite nicely. This makes sense as we have seen some strength in Brazilian corn and meal markets. Brazilian states now placing export taxes and their long line-ups will also be supportive to spreads and eventually to the outright futures. I think that $ 10.00 is a very easy target to see in beans and eventually get to $ 11.00 by April/ May when full-throttle harvest in Brazil and complicated logistics are in effect.

For the USDA baseline projections, a similar scenario to corn and wheat is being portrayed in the soybean complex as acres seem to be shrinking through 2025/26 given current price structure. Demand seems to continue to increase steadily on domestic and export front. 2025/26 acreage is projected to be down to 80.5 mln for soybeans down from 82 mln acres for 2016/17 given current price structure. Carryout for 25/26 is forecasted to fall to 266 mln bushels vs. 2016/17 estimate at 421 mln bushels. If we let demand alone, supply will struggle to keep up with given price scenarios currently.

What looks undervalued? Right now it is the beans and meal spreads. Given the consistent strong demand for both U.S. and South American soybeans and meal, I think that going long spread in beans and meal is a no-brainer, especially when N/X right now is at small carry and historically speaking we usually see this trade as an inverse into the summer time.

Overall, I see this report as bearish. We put on the LCJ/M spread again last week (AND ADDED TODAY) since the spreads is at historical levels and LC looks weak. A nice doji formed on this chart (spread and outright April futures) on Friday, so I like the spread as an aggressive form to short the LC market. Wholesale beef market has been reported lower all last week, so the futures seem to be aberration given the strength in the equities market finally rallying.

We took good profits today on the Lean Hogs April/ June bearspreads because we want to advance the bearspread strategy down the curve. Later in the session today, we put on Bearspread June/ August in Lean Hogs. LH spreads and outright futures look easily like they are heading lower. We want to continue with this bearspread through Lenten season when demand is usually weak.