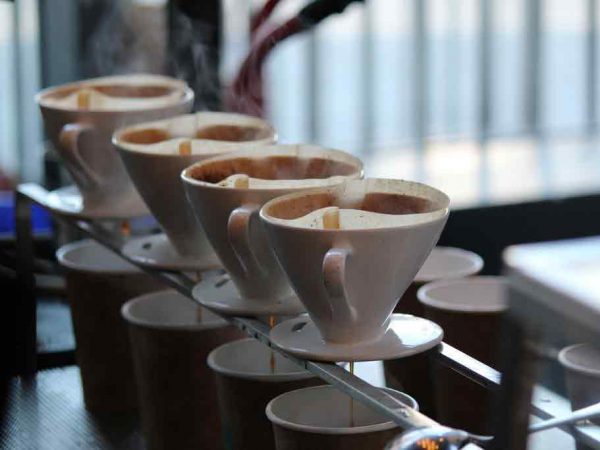 The US job market number from April came out below expectations renewing bets that the FED will postpone a rate increase and/or hike less than previously thought. An apparent short-covering of the greenback though has taken the Dollar Index from its lowest level since January 2015, or a rally of 2.4% in four days. Commodity indices fell in an inverted correlation with the dollar that we have been having for quite some time. Among the components of the CRB Copper led the losses in the past two weeks, with a negative performance of 6.59%, followed by Cotton, Wheat and Gasoline. Orange Juice, Gold, Soybeans and Natural Gas gained 12.07%, 2.17%, 1.9% and 1.75%, respectively. From China the trade balance figures showing lower exports and imports also contributed for commodity prices dropping today. Chinese commodity exchanges are trying to curb speculation after a frenzy buying and raw materials like Iron Ore and Rebar have sank 17% in a week in that market. Coffee in NY traded below US$ 120.00 cents in the first days of May, but it bounced helped by a strong robusta act. The London market saw a robust move of the Jul/Sep that took the most active month to the highest level since November 11th last year. Talks from the Santos bi-Annual convention that took place in Guarujá might have helped to stimulate the buying of the terminal.

The beginning of the harvest in Brazil brings different feelings on the prospects of the two varieties produced by the country. For arabica the conversations taking places at the meeting-rooms and on the hallways of the successful event promoted in the city of Guarujá could not be more enthusiastic. The importers that had a chance to travel through the coffee belt when asked about the conditions of the trees came out responding that they could not see the trees, only the fruits as the load rate is nothing less than spectacular. De-husking yields at the very early stage of the harvest are actually at levels usually seen at the end of harvest, meaning that they are very high, which likely will translate into a bigger output. It is unlikely that someone will revise their estimate at this stage, but if the perception proves to be the reality it would not be surprising a 10% increase on the arabica production – according to the chats with those willing to share a “number”. On the other hand the conilon crop looks really bad. Hollow-beans (“chochos”) seem to be all that is being harvested in Espírito Santo, reducing significantly the yields and the quality. In general what many have mentioned is that about 1 mln bags less conilons will be produced this year, maybe the reason for London to rally at the beginning of the Seminar. With fewer conies available the local industry will buy more arabicas for the internal consumption in Brazil, diminishing the exportable availability of the more “noble” beans. While this is music for the bulls, bears argue that, in absolute terms, the overall output could be larger, or at the very least 56 mln bags. The presentations given to the attendees had different price scenarios proposed, based on distinct S&Ds and more important the behavior of currencies. For the most part it seemed to me that overall the mood is friendlier for prices given the uncertainties that the weather can cause in a surplus that is not big, or a deficit that is small (yes there were both cases presented). In my view I was surprised to see NY digging down last week just when the Dollar Index was getting weaker, but then the Dollar Index reversed and the market went up – go figure. I think the positive CFTC report that came out on Friday showing funds getting short again against a commercial long position that increased nearly the same proportion as well as the Open Interest going up set the tone for the gap left on the “C” today. The question is how much more the market will be able to move up if the DXY firms further. At the end of the day, as I was speaking to a respected analyst on the last hours of the Santos event, there is no story on coffee at this moment, therefore the price range might remain intact (115 / 135?), with volatility dependable on currencies and the flow of the speculative community. On the FOB market the buyers are calmly waiting for differentials to ease, which could happen if the crop proves to be bigger and farmers see that not only they have a good production this year, but even better they will not have a much smaller cycle in 17/18. How? The abundant rains that the Sul de Minas has experienced until last April nurtured the trees to grow their branches (guia da árvore) quite a bit – so there was water enough to fill the fruits and also push vegetative growth. Also in favor of bears there is the credit limitation that producers face to make (too much) forward sales. So if the crop is bigger, the BRL stays around R$ 3.50 and NY rallies more we could see a better flow capping the upside potential. As our loyal reader can notice, my view/opinion on the weekly report lately has been only good for a week (actually sometimes even less than a week) making it hard to get the market right, but at the same time there is too much noisy surround the coffee market and not enough news to provide a different overview.

In a few words: The volatility of the Brazilian Real today (Monday) took New York lower after gapping up on the opening. The acting speaker of lower house announced the annulment of the impeachment and it took the BRL to 3.6703. Only a couple of hours later the action was dismissed by the Senate and the voting on the acceptance of the impeachment process, which will remove Dilma Roussef from the presidency for 180 days if passed, was confirmed for this coming Wednesday. Arabica then resumed the rally to settle at the highs. In the Santos Seminar last week the overall tone was friendlier for the price of the board, but at the same time the promising arabica harvest can limit the upside of the market. The DXY strengthening had provoked commodity indices to retract and while in coffee the funds have reduced their long it is not the same for key raw materials, which could carry away commodities in general as an asset class liquidation (algo and passive trade strategy).